TODAY: The contract is now official. It’s for $15.5MM, reports Jon Heyman of FanRag Sports (Twitter links), with a $1.5MM signing bonus and consecutive salaries of $8MM and $6MM.

YESTERDAY, 1:49pm: The sides are working to finalize a two-year pact for something approaching $8MM annually, per ESPN.com’s Jerry Crasnick (Twitter links). That’s right around the contract value that MLBTR suggested entering the winter.

11:19am: The Brewers are closing in on a contract with free agent righty Jhoulys Chacin, according to Ken Rosenthal of The Athletic (via Twitter). Terms of the prospective deal are not known at this time. Chacin is a client of the Legacy Agency. 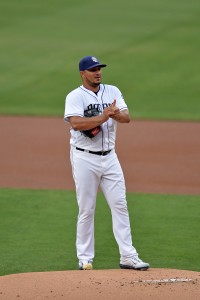 Chacin, 30 next month, is fresh off one of the best seasons of his career, having notched a 3.89 ERA with 7.6 K/9, 3.6 BB/9 and a 49.1 percent ground-ball rate over the life of 180 1/3 innings with the Padres, who signed him to a modest one-year commitment last offseason. Chacin’s strong output in 2017 positions him to handily top the $1.75MM guarantee he received in San Diego last winter. He’d join a Brewers rotation that will be without top starter Jimmy Nelson for a yet-undetermined portion of the 2018 campaign following September shoulder surgery.

Assuming the deal is ultimately completed, Chacin will join Chase Anderson and Zach Davies in the Milwaukee rotation, with Josh Hader, Brent Suter, Brandon Woodruff and Junior Guerra among the other candidates vying for opportunities to start. Chacin may not bring significant upside to the table, but he’s been a durable mid-rotation arm over the past two seasons and should help to stabilize a group that carried significant questions about the number of innings it could be reasonably expected to provide to manager Craig Counsell.

Chacin’s solid 2017 season did produce its fair share of skeptics — most notably owing to his significant home/road splits. In 100 1/3 innings at the pitcher-friendly Petco Park, Chacin logged a sensational 1.79 ERA, but that number spiked to a ghastly 6.59 in 80 road innings. Chacin also dominated right-handed hitters to the tune of a .213/.284/.318 opponents’ slash line, while lefties posted a much more adept .251/.356/.433 slash against him.

The move to a more hitter-friendly Miller Park, then, will undoubtedly raise some questions. However, Chacin enjoyed success earlier in his career in the game’s worst pitching environment, Coors Field, and he’s long limited home runs better than the average pitcher. Despite spending parts of six seasons in Colorado and despite the recent uptick in homers throughout the league, Chacin has averaged just 0.85 HR/9 as a big leaguer.

Newer metrics paint Chacin in a favorable light, as well; Statcast pegs Chacin’s average exit velocity on balls in the air (91.3 mph) and overall exit velocity (85.4 mph) among the weakest in the game for qualified pitchers. His .303 xwOBA, while not elite, places him alongside names like Danny Duffy, Jake Arrieta and Madison Bumgarner. That’s not to say, of course, that Chacin should be expected to produce at comparable levels to those three starters, but rather that his solid results and overall penchant for weak contact could be more conducive to success than his surface-level home/road splits would suggest.