6:35pm: Jon Heyman of FanRag passes along further details on Chatwood’s deal (Twitter links). He’ll earn $12.5MM apiece in each of the first two years and $13MM in the third.

By operation of an escalator provision, that $13MM salary for 2020 will climb to $15MM if he earns an All-Star nod in each of the next two seasons or receives one Cy Young vote in either of those years. A single Cy Young vote in each of those two seasons would mean a $17MM salary for 2020. And Chatwood will also receive a $500K bonus if he’s traded.

12:29pm: The exact number on the deal is a $38MM guarantee, Sahadev Sharma of The Athletic reports (Twitter link).

12:20pm: The Cubs announced on Thursday that they’ve agreed to a three-year contract with free agent right-hander Tyler Chatwood. The 27-year-old Chatwood, a client of Excel Sports Management, will receive “around $40MM” on the contract, according to MLB.com’s Jon Morosi (Twitter link). 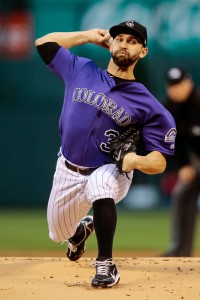 Chatwood, who’ll turn 28 in a couple of weeks, was one of the youngest free agents on the market. It’s a significant payday for a player that has yet to experience sustained success at the big league level, but the right-hander was a popular free agent target due to a number of appealing secondary metrics including his velocity, ground-ball rate and spin rate. Chatwood posted a 4.69 ERA with 7.3 K/9 against 4.7 BB/9 in 147 2/3 innings with the Rockies this past season, though in addition to his age and promising peripherals, he’s long performed considerably better away from the hitters’ haven of Coors Field.

In the past two years since returning from a second career Tommy John surgery, Chatwood has started 52 games (in addition to eight relief appearances) and totaled 305 2/3 innings with a 4.27 ERA. Those numbers don’t exactly leap out, but they also feature a dramatic home/road split: a 6.07 ERA and 21 homers allowed at Coors Field and a 2.57 ERA with 14 homers allowed on the road.

As I noted when sorting through some free-agent starters by individual skill set, Chatwood represents the hardest-throwing starter on the market and also boasts the best ground-ball rate and one of the lowest hard-contact rates in free agency. He also posted the 29th-highest spin rate on his four-seam fastball and the fifth-best spin rate on his curveball, per Statcast (min. 100 of each pitch type).

That said, the near-$13MM average annual value of the deal comes in well north of the three-year deal projected by MLBTR when ranking Chatwood 29th on our Top 50 list of the available free agents. The contract serves as a reminder that now, more than ever, teams are willing to look beyond traditional metrics like earned run average and beyond a player’s past performance and instead pay for projected output in the coming years.

The Cubs have a clear need in the rotation with both Jake Arrieta and John Lackey departing via free agency. He’ll slot into the fourth spot in the rotation behind Jon Lester, Kyle Hendricks and Jose Quintana at present, though it still seems likely that Chicago will add another arm to help round out the starting five. As a finalist for Nippon Professional Baseball star Shohei Ohtani, the Cubs could find out in the very near future if he’ll be the final piece to that puzzle. If not, they’ll presumably hit the trade market and explore further free agent additions at next week’s Winter Meetings in Orlando.