Feb. 16: The Brewers have announced the signing.

Feb. 14: The Brewers have signed southpaw Wade Miley to a minor league contract, USA Today’s Bob Nightengale reports (Twitter link).  Miley will earn $2.5MM in guaranteed money if he cracks Milwaukee’s MLB roster, and could earn as much as $5.7MM if he makes 29 starts in 2018. 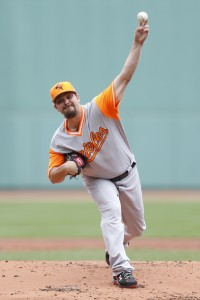 Miley joins former Orioles teammate Yovani Gallardo as low-cost veteran pitching signings for the Brew Crew this winter, to go along with their pricier two-year deal with Jhoulys Chacin.  Chase Anderson and Zach Davies sit atop Milwaukee’s rotation and Miley will be competing to fill the fifth starter’s role until Jimmy Nelson is able to return from labrum surgery.  The Brewers have also been linked to several bigger-name starters in free agent and trade talks, so the possibility still exists of a major acquisition that would push the likes of Miley, Gallardo, or Junior Guerra into minor league depth or even bullpen roles.

After averaging 186 innings per season since 2012, Miley will provide the Brewers with a lot of durability, though his effectiveness has sharply declined over the last two seasons.  The left-hander has a 5.48 ERA, 7.8 K/9, and 1.96 K/BB rate over 323 1/3 IP with the Orioles and Mariners since the start of the 2016 season, plus an ugly 17.7% home run rate that ranks third-highest of any qualified pitcher in baseball in that stretch.  Never a big strikeout pitcher, Miley’s control also let him down last year, with a career-worst 5.32 BB/9.

2017 was the final season of a three-year, $19.25MM deal Miley originally signed as a member of the Red Sox prior to the 2015 campaign.  The contract contained a $12MM club option for 2018, though given the lefty’s tough year, it wasn’t any surprise that the Orioles chose to buy that option out for $500K.

The O’s and Twins both had some interest in Miley this winter, though the Brewers seemed to have an advantage since Miley was reportedly looking to return to the National League.  Most of Miley’s success at the big league level came as a member of the Diamondbacks from 2011-14, including an All-Star rookie season in 2012 that saw him finish second in NL Rookie Of The Year voting.