Veteran infielder Eduardo Nunez is headed back to the Red Sox, the team announced Sunday. Nunez has agreed to a one-year deal with a player option — essentially, then, a two-year guaranteed contract with opt-out — and will reportedly be guaranteed $8MM on the deal. Right-hander Ben Taylor was designated for assignment to clear a spot on the 40-man roster, per the team. 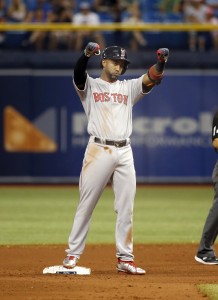 Nunez has long been mentioned as a target for the Sox, who could use the depth in the infield and are especially interested in finding a fill-in for the still-recovering Dustin Pedroia. While there’s some optimism that the team’s long-time second baseman won’t miss an extended period to open the year, he has been banged up a fair amount in recent seasons. Plus, the organization is also preparing to rely on the relatively unproven (but plenty talented) Rafael Devers at third.

Though Nunez has spent most of his career elsewhere, he made an impression during his stint in Boston after arriving in a trade deadline swap from the Giants. Nunez posted a robust .321/.353/.539 batting line with eight home runs in 173 plate appearances after the deal.

Unfortunately, Nunez was limited by a knee injury that ended up requiring a lengthy rehab period. Indications are, though, that he’s back to full strength as Spring Training gets underway.

Clearly, nobody will expect Nunez to continue producing like a middle-of-the-order slugger. But he has unquestionably raised expectations for the offensive side of his game after a tepid showing to start his career. Since the beginning of the 2015 season, Nunez owns a strong .296/.332/.443 slash.

The other elements of Nunez’s game are worth noting, too. He has also swiped 72 bags over the past three seasons and generally grades as a quality baserunner. And while he has never graded as a particularly good defender, he is capable of palatable handling of any infield position and has also spent some time in the corner outfield.

In his new deal with the Sox, then, Nunez can reliably be asked to handle second base early in the season while Pedroia is on the shelf before then returning to a utility role. That’s of additional importance given the yet-unproven presence of Devers at the hot corner; while the former top prospect impressed in his half-season debut in 2017, he’s yet to log a full season in the Majors and did cool after a hot start to his career. Nunez gives the Sox a plenty serviceable option at third base, should the need ever present itself.

An earlier version of this post mistakenly suggested that Nunez had undergone surgery on his knee.