The Yankees have completed their second intra-division swap of the week, officially acquiring left-hander J.A. Happ from the Blue Jays in exchange for infielder Brandon Drury and outfield prospect Billy McKinney. Both teams have announced the swap. 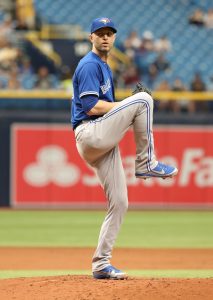 Happ, 35, is in the final season of a three-year, $36MM contract and is still owed $4.75MM of that sum through the end of the season. He’ll step into a Yankees rotation that currently features Luis Severino, Masahiro Tanaka, CC Sabathia and Sonny Gray. Since losing sophomore lefty Jordan Montgomery to Tommy John surgery, the Yankees have tried Domingo German, Jonathan Loaisiga and Luis Cessa in that fifth spot, but Happ will now provide a more experienced arm to step into that void.

While he struggled badly in a pair of early July starts (one against the Yankees) that inflated his season-long numbers, Happ has enjoyed a strong season overall. Through 114 1/3 frames, he’s registered a 4.18 ERA with more impressive marks in FIP (3.84), xFIP (3.63) and SIERA (3.51). Happ has averaged a career-high 10.3 strikeouts per nine innings pitched against just 2.8 walks per nine, and he’s kept the ball on the ground at a 44.6 percent clip. He’ll be a free agent at the end of the year, making him the Yankees’ second short-term addition of the week after landing Zach Britton in yet another intra-division trade.

The Blue Jays are surely thrilled to be able to pick up a controllable MLB asset in the form of Drury in exchange for a player who was set to depart via free agency at the end of the year anyhow. Drury was the Yankees’ Opening Day third baseman, but he quickly became an odd man out in the Bronx after both Miguel Andujar and Gleyber Torres emerged in the Majors while Drury was on the DL due to severe migraines and blurred vision. 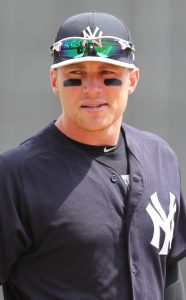 While Drury, 25, has batted just .176/.263/.275 in 57 plate appearances with the Yankees in 2018, he’d previously established himself as a solid producer with the Diamondbacks from 2016-17. In that time, Drury batted a combined .273/.323/.453 with 29 homers, 68 doubles and three triples over the life of 979 PAs. He’s capable of handling both second base and third base, so with Josh Donaldson set to hit free agency this winter plus Devon Travis’ perennial injury troubles, Drury is all the more appealing to the Toronto organization. The Jays can control Drury through the 2021 season.

The inclusion of McKinney in the deal will somewhat incredibly mark the third trade since being selected in the first round (No. 24 overall) of the 2013 draft. The A’s selected McKinney out Plano West Senior High School and traded him just over a year later in the deal that sent Addison Russell to the Cubs in exchange for Jeff Samardzija and Jason Hammel. McKinney was moved once again in 2016 when the Cubs included him as part of the four-player package that netted them Aroldis Chapman (with the aforementioned Torres as the deal’s headliner).

McKinney, 23, made his MLB debut earlier this season and went 1-for-4 before being sent back down to the minors after appearing in two games. He’s hit for plenty of power in Triple-A this season (.273 ISO), but he’s also struggled to get on base. Through 228 PAs, he’s slashing .230/.294/.502 with 13 homers, eight doubles and five triples. McKinney isn’t regarded as the top-tier prospect he once was, but he entered the season ranked as the Yankees’ No. 20 prospect by Jim Callis and Jonathan Mayo of MLB.com, receiving average grades for his power, speed and glove. He played center early on in his career but has been utilized more in the outfield corners recently.

Jon Morosi of MLB.com reported that an agreement was in place (via Twitter). Joel Sherman of the New York Post (Twitter links) and Jon Heyman of Fancred (Twitter link) had previously indicated that a deal was nearing its completion. MLB.com’s Mark Feinsand reported that both Drury and McKinney were in the deal (Twitter link), and ESPN’s Jerry Crasnick tweeted that the swap had become official shortly before the clubs announced the deal.