The Mariners have acquired right-handed reliever Sam Tuivailala from the Cardinals in exchange for minor league right-hander Seth Elledge, the teams announced Friday. Elledge has been assigned to Double-A Springfield. 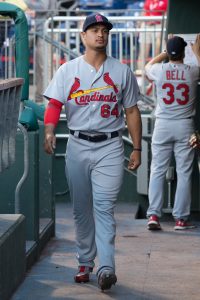 “Sam is in the midst of his second consecutive solid big league season, and has pitched in parts of four Major League seasons but has barely two years of service time,” Mariners general manager Jerry Dipoto said in a press release announcing the move. “We view this as a move for our present and our future.”

It’s another somewhat creative and unexpected trade for a Mariners club that has made a habit of identifying atypical trade candidates in recent seasons in spite of a poor farm system. In Tuivailala, Seattle is adding a 25-year-old righty who is in the midst of a solid season and can be controlled through the 2022 campaign.

Tuivailala, who won’t be eligible for arbitration until after the 2019 season, has spent his entire career in the Cardials organization since being selected in the third round of the 2010 draft. Dating back to Opening Day 2017, he’s stepped up and established himself as a useful contributor at the MLB level, tossing 74 innings of 3.04 ERA ball with 7.3 K/9, 2.7 BB/9, 0.85 HR/9 and a 48.4 percent ground-ball rate. He’s averaged 95.3 mph on his fastball over the past two seasons and made positive gains in both swinging-strike rate (from 9.5 percent to 10.1 percent) and chase rate (from 27.9 percent to 29.2 percent) so far in 2018.

While much has been made of the Mariners’ pursuit of rotation help, they’ve also been linked to bullpen upgrades, and Dipoto and his staff have previously prioritized acquiring longer-term assets when trading their own young talent away (e.g. Ryon Healy, James Pazos, Ben Gamel, Mitch Haniger). Tuivailala adds to that trend and gives recently extended manager Scott Servais another option late in games to help bridge the gap from the rotation to All-Star closer Edwin Diaz.

For the Cardinals, the trade of Tuivailala comes as a surprise component to an otherwise highly anticipated shuffling of the team’s pitching staff. President of baseball ops John Mozeliak recently indicated that changes were coming to his roster, specifically as pertains to the ’pen, though given Tuivailala’s remaining club control and general success over the past two seasons, few could’ve reasonably expected him to be a part of the machinations.

That said, in prying Elledge away from the Mariners, the Cards will pick up an intriguing relief prospect who seemingly has more upside than Tuivailala carries. Seattle selected Elledge in the fourth round of last season’s draft, and he’s absolutely torn through Class-A Advanced with the Mariners, working to a 1.17 ERA with 12.7 K/9, 3.5 BB/9, 0.23 HR/9 and a 50 percent ground-ball rate.

Elledge has been virtually untouchable to Class-A Advanced batters, yielding just 18 hits in 38 1/3 innings of work. Jim Callis and Jonathan Mayo of MLB.com ranked Elledge 10th among Seattle farmhands on yesterday’s midseason update of each team’s Top 30 lists. The MLB.com duo writes that he sits 93-95 mph with a fastball that features “heavy sink” and is complemented by a slider and changeup — both of which have the potential to be average offerings.