The Pirates have officially landed righty Keone Kela from the Rangers, per Jeff Passan of Yahoo Sports (via Twitter). Lefty Taylor Hearn is one of the players in the deal, the Rangers announced. The other remains a player to be named later. 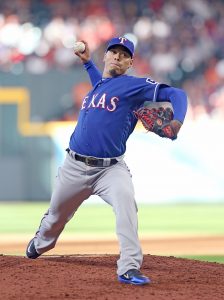 Kela, 25, has turned in a solid season to this point while functioning as the closer in Texas. He’ll presumably slot into a setup role in Pittsburgh in front of Pirates closer Felipe Vazquez.

The move reflects the Bucs’ surprising surge in the standings of late. While the club is still seven back in a tough NL Central division, it’s only four out of the Wild Card race and certainly could end up in postseason position. Of course, this isn’t a purely win-now move by any stretch. Kela, who is earning just $1.2MM this year, will be controllable via arbitration through 2020.

While he has been on an upswing of late, there have been some low points as well. On the heels of a rough 2016 season, Kela found himself in the Rangers’ doghouse after some Spring Training shenanigans. He has also dealt with some problems in his elbow and shoulder, though to this point no major problems have arisen.

The Rangers may have seen this as the right time to cash in Kela, though surely he’d have remained an asset at the back of their bullpen. Given the organization’s need to build a new core, and the abundance of talent elsewhere in the division, it certainly makes sense to move relievers — even established but still-controllable ones.

This swap will bring some real value. Hearn came to Pittsburgh along with Vazquez in the same deadline swap two years ago. He’s widely considered an intriguing hurler, albeit one who’ll have to make some strides to factor as a starter at the game’s highest level.

Whether or not Hearn can tap into his ceiling, he seems likely to be a big-league contributor and there’s good reason to think he’ll at least become a high-quality reliever. Soon to turn 24, Hearn has mowed through the Double-A competition since a slow start to the present campaign. Overall, he owns a 3.12 ERA with 9.3 K/9 and 3.3 BB/9 on the year. Jim Callis and Jonathan Mayo of MLB.com ranked him seventh among Pirates farmhands in their midseason re-ranking of the organization, lauding his 97-98 mph heater and above-average changeup while also noting the need to improve his slider and the control of his entire repertoire.