TODAY: The deal is now official. Former first-round pick Forrest Wall is also headed to Toronto, as Jon Heyman of Fancred tweeted just before the announcement. Bouchard is not in the pact, at least directly. In addition to Wall and Spanberger, the package includes a player to be named later, though it’s not known presently whether Bouchard is among the possibilities.

YESTERDAY, 8:02PM: Another first base prospect, Sean Bouchard, is also heading to Toronto in the deal, as per Patrick Saunders of the Denver Post.

7:54PM: Minor league first baseman Chad Spanberger is expected to be heading to the Blue Jays as part of the trade, Sportsnet.ca’s Shi Davidi reports (Twitter link).  A sixth-round pick for Colorado in the 2017 draft, Spanberger is ranked 24th on MLB.com’s list of the top 30 Rockies prospects, with the scouting report noting Spanberger’s big power potential but also quite a few strikeouts.

7:22PM: The Rockies and Blue Jays have agreed to a trade that will see right-hander Seunghwan Oh join the Colorado bullpen, with The Athletic’s Robert Murray tweeting that the trade is “a done deal.”  Steve Phillips of MLB Network Radio on Sirius XM reported earlier today that an Oh trade was close to happening, with MLB.com’s Jon Paul Morosi later adding the news that Colorado was the team involved in the deal.

Oh’s stock was down in the offseason, following a somewhat rough 2017 campaign that saw him lose his closer’s job with the Cardinals and struggle with the long ball to the tune of a 1.5 HR/9 rate.  This led to Oh signing a low-cost one-year deal with the Blue Jays worth $1.75MM in guaranteed salary and a $2MM club option ($250K buyout) for the 2019 season. 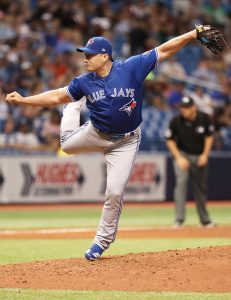 That signing ended up being a nice bargain for the Jays, culminating in this flip of the 36-year-old for some prospect capital.  Oh has posted a 2.68 ERA, 10.5 K/9, and 5.50 K/BB rate over 47 innings for Toronto, looking far more like his “Final Boss” form from the 2016 season (his first year in Major League Baseball) than his less-impressive 2017 edition.  The advanced metrics have been pretty sold on Oh’s performance, as his .266 wOBA is nearly identical to his .264 xwOBA, and ERA predictors (3.03 FIP, 3.77 xFIP, 2.91 SIERA) mostly back up that impressive 2.66 real-world ERA.

He has also largely gotten over his home run issues, with only an 0.96 HR/9 and 8.2% homer rate this season.  This will be particularly important for Oh as he shifts to Coors Field, though he has managed to success in another hitter-friendly ballpark (Rogers Centre) despite just a 29.8% grounder rate.

While Oh should help the Rockies’ relief corps, the fact that the bullpen was such a pressing trade deadline need represents a misfire for the team.  Colorado spent $106MM total in three-year free agent pacts for Wade Davis, Bryan Shaw, and Jake McGee, only to see all three fail to live up to expectations.  Shaw and McGee have particularly struggled, leading for the Rox to seek out another arm to bridge the gap to Davis in the ninth inning.  Oh will join Adam Ottavino (the pen’s one bright spot) as the Rockies’ chief setup options.