The Yankees have promoted one of the game’s best pitching prospects, left-hander Justus Sheffield, from Triple-A Scranton, Conor Foley of the Scranton Times-Tribune reports. Sheffield’s not on the Yankees’ 40-man roster, which is full, so they’ll need to create space for him. 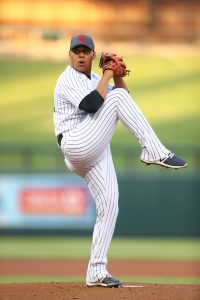 Sheffield entered the professional ranks as a 2014 first-round pick of the Indians, who chose him 34th overall, but only lasted a couple years in the organization. The Tribe, hoping to win a World Series in 2016, dealt a package including Sheffield, outfielder Clint Frazier and lesser pieces to the Yankees for star reliever Andrew Miller at that July’s non-waiver trade deadline. Miller nearly helped the Indians to a title after the trade, but they fell in seven games to the Cubs in the Fall Classic that season.

Sheffield was a well-regarded prospect when Cleveland sent him to New York, and that remains the case. The 6-foot, 200-pounder ranks as the majors’ 22nd-best prospect at Baseball America (subscription required), while both MLB.com (No. 27) and FanGraphs (No. 50) are among other prominent outlets that are bullish on him. In their free scouting report, Jim Callis and Jonathan Mayo of MLB.com note that the 22-year-old Sheffield may end up with three “plus” offerings – a 92 to 97 mph fastball, a slider that sits in the mid-80s and a changeup – and add that he has the potential to emerge as a No. 3 starter in the majors.

Sheffield has impressed as a starter in the minors, including this season at Scranton, where he logged a stingy 2.56 ERA/3.13 FIP with 8.59 K/9, 3.68 BB/9 and a 44.9 percent groundball rate in 88 innings. But the Yankees did recently prepare Sheffield to work as a reliever upon his first big league promotion, and he may fill that role in the coming weeks. After all, with Luis Severino, Masahiro Tanaka, J.A. Happ, C.C. Sabathia and Lance Lynn, the Yankees currently have a set rotation, and that group will shrink if the Bombers get past the AL West runner-up in the wild-card round and advance to the ALDS.

While Sheffield looks like a potential reliever for the Yankees right now, he may have a shot to win a spot in their rotation in 2019. The only two members of the Yankees’ starting staff who are sure to return next season are Severino and Tanaka. Happ, Sabathia and Lynn are set to become free agents, and there aren’t any obvious in-house replacements on hand beyond Sheffield. Fellow youngsters Domingo German – whom the team’s recalling from Scranton, per Foley – and Jonathan Loaisiga have struggled in the majors this season, while Jordan Montgomery will miss a large portion of 2019 after undergoing Tommy John surgery in June. Therefore, the door could be open for Sheffield, who ranks as the Yankees’ No. 1 prospect at Baseball America and MLB.com.