The Indians announced Wednesday that they’ve acquired outfielder Jordan Luplow and infielder Max Moroff from the Pirates in exchange for utility man Erik Gonzalez and minor league right-handers Tahnaj Thomas and Dante Mendoza. The Pirates, too, have issued a press release announcing the move. 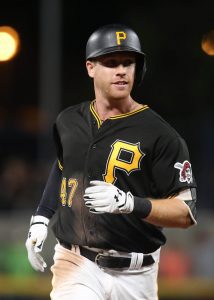 In Luplow, Cleveland adds an outfield option to a perilously thin mix. The 2014 third-rounder has yet to find success in the big leagues, but he’s raked to the tune of a .300/.378/.479 slash with 15 homers and 11 steals in 539 Triple-A plate appearances across the past two seasons. Luplow won’t turn 26 until next September, so there’s still plenty of time for him to carry that Triple-A productivity over to the big league level.

From a defensive standpoint, Luplow has played all three positions in the Majors, albeit just 14 innings in center, and drawn generally positive reviews. In 382 2/3 innings of outfield work as a Major Leaguer, he’s posted +4 Defensive Runs Saved, a 3.1 Ultimate Zone Rating and an even mark in Statcast’s Outs Above Average. Luplow still has a minor league option remaining, so he can be sent to the minors without being exposed to waivers if he doesn’t crack the roster out of Spring Training next year.

In Gonzalez, the Pirates will acquire a versatile infield option who’s had more big league success than Moroff to this point, though he’s yet to truly thrive at the plate. Gonzalez hit .265/.301/.375 in 143 PAs this past season and is a career .267/.306/.406 hitter in Triple-A. He’s out of minor league options, so he’ll jump right into the mix for playing time with the Pirates in 2019 — a sentiment that was emphasized by general manager Neal Huntington in a press release announcing today’s trade.

“Erik Gonzalez is an athletic middle infielder who plays solid defense and has the potential to be a productive hitter at the major league level,” said Huntington. “He gives us another quality option to play shortstop or in the middle of our infield this year and into the future.”

Thomas, 19, spent this past season pitching for the Indians’ Rookie-level affiliate in Arizona, though he pitched just 19 2/3 innings in total. Overall, he’s totaled 58 professional innings since signing out of the Bahamas as a 16-year-old, and he’s posted a 5.28 ERA with a 61-to-43 K/BB ratio in that time. The bottom-line results are rough, but Thomas did land 30th on MLB.com’s ranking of the Indians’ prospects, with Jim Callis and Jonathan Mayo writing that the projectable righty should add velocity to what is already a 92-95 mph fastball. He also draws praise for his athleticism and a potentially above-average curve, but he’s still several years away from being anywhere near big league ready. Fangraphs’ Eric Longenhagen was a bit more bullish, ranking him 26th in what he tweets is a “very deep” Cleveland system.

Mendoza is also 19 and also spent the most recent season pitching for the Indians’ Rookie affiliate in the Arizona League. He worked to a 4.58 ERA in 37 1/3 innings with 37 strikeouts against 20 walks. Longenhagen tweets that Mendoza is another “projection arm,” crediting him for two above-average secondary offerings and an 87-90 mph heater that figures to tick upwards as his 6’5″ frame fills out.

The swap also opens a spot on the Pirates’ 40-man roster, as they’re dealing two big leaguers for Gonzalez and a pair of right-handers who are years from needing 40-man protection. The trade, then, gives them a potential upgrade in terms of utility infielder while also giving the front office some additional flexibility in advance of next Tuesday’s deadline to protect players from the Rule 5 Draft.