SUNDAY: Chicago has announced the signing.

SATURDAY: The Cubs have agreed to a deal with free agent pitcher Kendall Graveman, per ESPN’s Jesse Rogers (via Twitter).

Graveman gets a major league contract worth $575K for 2019 with a $3MM club option for 2020. That option year does not include a buyout. Even one day on the 2019 roster, however, will trigger an escalator clause to bring Graveman’s salary to $2MM, and he can earn an additional $500k in performance bonuses. 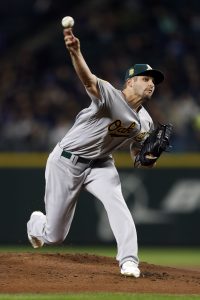 The A’s say goodbye to another piece from the Josh Donaldson trade of 2014. Infielder Franklin Barreto is now the only player remaining from the trade that sent Oakland’s star third baseman to Toronto the year before he would win the MVP award with the Blue Jays. Graveman spent four seasons in Oakland, the last of which was mostly lost to injury. He made only seven starts in 2018 with a 7.60 ERA before undergoing Tommy John surgery.

For the Cubs, they get to closely monitor the recovery of a potential rotation arm in 2020 at a very low cost. From their presumed 2019 rotation, only Hamels will be a free agent after next season, but Kyle Hendricks will be entering his final year of arbitration, and Jose Quintana will be facing the first of consecutive club options. There’s almost no downside for the Cubs here, while Graveman gets to benefit from the medical resources of the a large market team as he rehabs from Tommy John.

The timetable for his 2019 return is as of yet unclear, but it’s not expected he will play much of a role, if any, on the Cubs next year, per Gordon Wittenmyer of the Chicago Sun Times (via Twitter).The Cubs signed Drew Smyly in a similar situation before last season, only to flip him to the Rangers to help cover the cost of Cole Hamels’ club option this year. Garrett Richards, in a similar situation, signed for two years and $15.5MM guaranteed with the Padres, though he carries a longer track record of success than Graveman.