3:45pm: The Mets announced that Ramos will be introduced at a press conference Monday at 11 a.m. ET. Rosenthal tweets that in addition to the salary parameters reported by Wagner below, Ramos will earn an additional $500K if he’s able to make 100 starts at catcher in a given season.

3:45pm: The Mets have reached an agreement with free-agent catcher Wilson Ramos, pending a physical, according to Andy Martino of SNY. Daniel Alvarez Montes of ElExtrabase previously reported the two sides had agreed to a contract. It’s a two-year pact for the Octagon client, Jeff Passan of Yahoo Sports tweets. The deal is worth $19MM, per Jon Heyman of Fancred, though Joel Sherman of the New York Post reports Ramos will receive a $19.5MM guarantee and an option for 2021. Post colleague Ken Davidoff adds that Ramos could make up to $26MM.

The Mets’ addition of Ramos takes them out of the running for Marlins catcher J.T. Realmuto, whom they had been aggressively pursuing this week, as Martino notes. They’re the second team to reportedly drop out of the Realmuto sweepstakes in the past couple days, joining the NL East rival Braves. 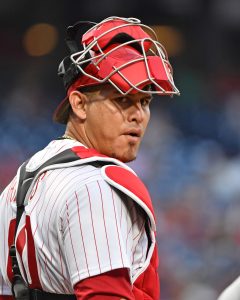 For the Mets, losing out on Realmuto means they’ll get to keep major league assets such as Brandon Nimmo, Michael Conforto and Amed Rosario, all of whom had piqued the Marlins’ interest in talks. At the same time, they won’t end up with arguably the majors’ best catcher. Still, while the 31-year-old Ramos’ isn’t the prize Realmuto would have been for New York, he should provide the team with a quality starter behind the plate.

Ramos, set to join his third NL East team (he was previously with Washington and Philadelphia), has batted .273/.317/.439 (103 wRC+) across 2,944 major league plate appearances, making him an easily above-average offensive catcher. Defensively, Ramos has caught a lifetime 32 percent of would-be base stealers, beating out the 28 percent league average, and earned positive marks behind the plate from Baseball Prospectus for the majority of his MLB career.

In 2018 – which he divided between the Rays and Phillies – Ramos enjoyed arguably his best offensive season, slashing .306/.358/.487 (130 wRC+) with 15 home runs in 416 PAs. Ramos also caught 29 percent of would-be base thieves and received decent overall grades from BP. It was clearly a strong rebound campaign for Ramos, who only appeared in 64 games in 2017 with the Rays as he worked his way back from the torn right ACL he suffered as a member of the Nats late in 2016.

Ramos has torn his right ACL twice in his major league career, which is especially troubling for an aging backstop. But he still doesn’t come with the injury concerns of fellow Mets catcher Travis d’Arnaud, who missed all but four games last year as a result of a partial UCL tear, has only appeared in upward of 100 games twice in his career and, when healthy, hasn’t lived up to the hype he had as a prospect. D’Arnaud now figures to back up Ramos, per Ken Rosenthal of The Athletic, calling into question what the Mets will do with fellow catchers Kevin Plawecki and Tomas Nido. Speculatively, the out-of-options Plawecki – a former top-100 prospect – could be a trade candidate.

Entering the offseason, MLBTR forecast a three-year, $36MM guarantee for Ramos, who will fall short of that with his new club. His departure from the open market easily leaves Yasmani Grandal as the premier catcher available in free agency. The Mets also had interest in Grandal, but as a qualifying offer recipient, signing him would have forced them to surrender their second-highest draft pick in 2019, $500K in international bonus space and a significant amount of their major league payroll room. Ramos only cost money, on the other hand, but his signing still counts as yet another major move in the Brodie Van Wagenen era. The rookie GM had been aggressive even before the Ramos agreement, as he acquired Robinson Cano, Edwin Diaz and Jeurys Familia over the past couple weeks. Van Wagenen’s likely not done yet, either, as he attempts to construct a roster capable of trumping the sub-.500 versions the Mets fielded from 2017-18.