Jan. 11: The Yankees have now formally announced Britton’s return to the organization.

Jan. 5, 8:13pm: Britton will earn $13MM in each of the next three seasons and could make another $14MM in 2022, according to Tim Brown of Yahoo Sports. All said, it’s a $39MM guarantee that could reach $53MM. However, if Britton opts out after two years, it’ll be $26MM. He’ll also get a $1MM assignment bonus if the Yankees trade him, Rosenthal relays.

8:03pm: The three-year guarantee is in the $40MM neighborhood, tweets Rosenthal, who writes that it could go “beyond” $50MM over four years. Bob Nightengale of USA Today notes the figure would be between $50MM and $55MM.

7:50pm: A deal is in place, per Jeff Passan of ESPN, who reports it’ll be for approximately $13MM per season. Passan adds the Yankees will be able to exercise a fourth-year option after the second season. Otherwise, Britton will have the choice to opt out at the conclusion of the second year.

7:40pm: The Yankees are making progress on a contract with free-agent reliever Zach Britton, Ken Rosenthal of The Athletic tweets. The two sides could finalize an agreement “soon,” per Rosenthal. The deal will be for three guaranteed years, but it’ll include an opt-out clause for Britton and an opt-in for the Yankees that could take it to four years, Jon Heyman of Fancred reports. Britton is a client of the Boras Corporation. 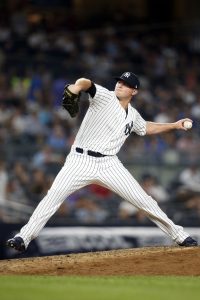 New York has shown reported interest throughout the winter in Britton, one of two key relievers the team saw reach free agency after last season. One of those hurlers, righty David Robertson, signed with the Phillies on Friday, making it all the more important for the Yankees to re-up the left-handed Britton.

Last season was the second straight injury-shortened campaign for Britton, who has battled forearm, knee and Achilles issues since his 2014-16 heyday in Baltimore. Thanks in part to his health troubles, Britton hasn’t been the dominant force he was during that otherworldly three-year stretch. Across 209 innings in those seasons, Britton led relievers in groundball rate (77.9 percent), finished second in ERA (1.38), logged 9.26 K/9 against 2.37 BB/9, and converted 120 of 128 save chances.

While Britton is no doubt one of the majors’ most proven closers, he won’t be the game-ending option next season in New York, which already has Aroldis Chapman for that role. He’s instead in line to rejoin Dellin Betances and Chad Green as the top setup options to Chapman (depth chart), and it’s possible free-agent righty Adam Ottavino will slide in along with them. Ottavino, the second-best free-agent reliever left (trailing Craig Kimbrel), remains a possibility for the Yankees, Mark Feinsand of MLB.com tweets.

Adding Ottavino would be yet another costly move for the Yankees to ensure they offer another all-world bullpen in 2019. For now, with Kimbrel still on the board, Britton stands as the highest-paid reliever in this winter’s class. With $39MM in guaranteed money coming to him, Britton’s contract outdoes the deals awarded this offseason to similarly regarded relievers Robertson, Jeurys Familia, Andrew Miller, Joe Kelly and Joakim Soria. Britton’s pact is also worth north of the $33MM guarantee MLBTR predicted he’d secure when he entered free agency.