“The A’s were disappointed upon learning of this suspension,” the team said in a statement. “We fully support MLB’s Joint Drug Prevention and Treatment Program and we will welcome Frankie back after the discipline has been served.”

Montas issued a statement of his own (via MLBPA Communications), saying, in part, “While I never intended to take any prohibited substance, I unfortunately and unknowingly ingested a contaminated supplement that I had purchased over-the-counter at a nutrition store here in the United States.” 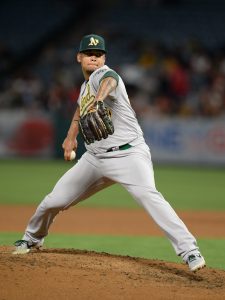 The 26-year-old added that he accepts responsibility for the ban and hopes to contribute to the A’s later in the season.

Montas, who’s earning $560K this year, won’t be paid during his suspension. More importantly for Oakland, though, he won’t be eligible for the postseason if the team clinches a berth. At 40-36, the A’s are just one game out of the AL’s second wild-card spot.

The A’s are in contention this season thanks in no small part to Montas, who performed like an ace in 2019 prior to this shocking development. In what will go down as his last start for at least a few months, the hard-throwing right-hander tossed eight innings of one-run, nine-strikeout ball in a win over the Rays on Thursday. It was the fourth straight quality start for Montas, owner of a sterling 2.70 ERA/2.86 FIP with 9.7 K/9, 2.1 BB/9 and a 50.8 percent groundball rate in 90 innings this season.

Should they stay in contention leading up to the July 31 trade deadline, the Athletics will have a chance to acquire starting help. However, it’s hard to believe anyone they’d acquire would make an impact similar to that of Montas, who’s near the top of the majors in most starting stats this year. The club does have important injury reinforcements working back – including Sean Manaea and Jesus Luzardo – who figure to make life easier for the Athletics once they return. However, any way you look at it, the loss of Montas is a devastating shot to the A’s rotation. It could have a significant effect on the AL playoff race as a result.