The Astros acquired right-handers Aaron Sanchez and Joe Biagini for outfielder Derek Fisher, according to reports from Rob Longley of the Toronto Sun, Joel Sherman of the New York Post, and Shi Davidi of Sportsnet.ca.  The deal was a precursor to a trade deadline buzzer beater, as the Astros picked up Zack Greinke from the Diamondbacks as well. 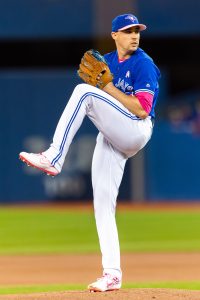 Sanchez, 27, was drafted 34th overall by the Blue Jays in 2010 and was ranked among the best 35 prospects in baseball prior to his 2014 debut.  The Jays had Sanchez work out of the bullpen as a rookie, and he joined the rotation the following season.  He suffered a lat strain that season and returned as a reliever.  Sanchez  was again moved back to the rotation for the 2016 season, and he authored his finest campaign: a 3.00 ERA in 30 starts, good for a seventh place Cy Young finish.  He would never reach those heights again, dealing with a blisters and finger injuries in the ensuing years. His ERA sits at 6.07 in 23 starts this year.

The 2019 season has seen Biagini bounce back to the tune of a 3.75 ERA over the life of 48 innings. He’s been homer-prone — like most of the league — but is sporting a career-high 9.0 K/9 against an even 3.0 BB/9 with a 45.3 percent ground-ball rate. There’s reason to be optimistic about further improvement, too; Biagini’s 13.7 percent swinging-strike rate is easily a career-best, as is his 36.1 percent opponents’ chase rate on pitches outside the strike zone. The spin rate on his breaking ball is elite as well, ranking 21st of 399 big league pitchers to throw the pitch at least 100 times dating back to 2016. That type of profile has yielded substantial benefits for the Astros in the past, of course, and they’ll look to elevate his profile with their data-heavy approach moving forward.

Once a top 100 prospect, Fisher hasn’t established himself in the majors since debuting in 2017. He likely wouldn’t have gotten a chance to do so in Houston, either, with the team loaded in the outfield now and with high-end prospect Kyle Tucker ahead of him in the organizational pecking order. Fisher has hit just .201/.282/.367 with 10 home runs in 312 MLB plate appearances, but he has been quite productive in Triple-A ball. The 25-year-old has slashed .289/.379/.520 with 50 HRs in 1,053 PA at the minors’ highest level.