The Diamondbacks have worked out a last-minute deal for Mariners righty Mike Leake, according to Jon Heyman of MLB Network (via Twitter). Infield prospect Jose Caballero is going to Seattle in return, per Nick Piecoro of the Arizona Republic (Twitter link). Arizona is taking on only $6MM of Leake’s remaining obligations, according to John Gambadoro of ArizonaSports.com. 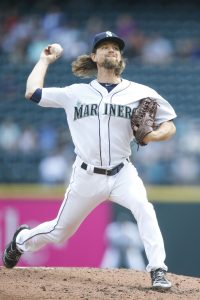 It’s been a precipitous drop for the 31-year-old Leake, who’s now accrued nearly 1,800 big-league innings since debuting straight from Arizona State in 2010. Leake’s walk and strikeout rates have remained mostly intact, but he hasn’t been able to withstand the league-wide homer onslaught this season, having allowed an easily-career-high 1.71 per nine in 137 IP thus far. His average fastball velocity’s cratered to a career-worst 88.3 MPH, though the always-crafty mix-and-match artist has adjusted: his cutter and changeup, long his go-to out pitches, have each seen an uptick in usage, with the former being deployed nearly 27% of the time at current.

Leake’s park-adjusted peripherals still place firmly in the fourth/fifth starter range – thanks mostly to a string of sterling outings in the latter half of this month – and his presence should stabilize the back half of a Diamondbacks rotation that’s leaned heavily on the mostly ineffective arms of Taylor Clarke and Merrill Kelly of late. After the trade of Zack Greinke to the Astros, Leake will line up with the newly-acquired Zac Gallen, the still-here Robbie Ray, and some combination of Clarke, Kelly, and rookie Alex Young, whose peripherals lag far behind the 2.51 ERA he’s posted in his first six big-league outings.

It’s perhaps a bit chastening for the M’s, who acquired the righty from the Cardinals in a now-defunct August swap two seasons ago, to recoup only $6MM from the some $25MM remaining (through 2020) on the his deal. Caballero, 22, didn’t assert himself as a top organizational prospect for the Snakes, so the swap mostly seems centered around the marginal amount saved and opportunity for the club to insert a young hurler, perhaps lefty Justus Sheffield, into its rotation for the remainder of ’19. Righty Matt Wisler, acquired after being designated for assignment by San Diego, should also be afforded a look: the one-time top prospect has finally flashed the bat-missing stuff that was so often absent from his repertoire in seasons past.