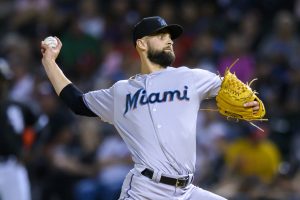 Tampa Bay’s landing a notable bullpen piece in Anderson, a 29-year-old rookie who has logged a 3.92 ERA/2.72 FIP with 14.22 K/9 and 3.3 BB/9 in 43 2/3 innings this season. The hard-throwing Anderson’s on a minimal salary right now and won’t be eligible for arbitration until the conclusion of the 2021 campaign, which surely adds to his appeal from the low-budget Rays’ standpoint.

Likewise, Richards isn’t slated to reach arbitration until after 2021. The 26-year-old recently lost his place in the Marlins’ rotation, though he was a passable member of their starting group from 2018-19. He posted a 4.46 ERA/4.38 FIP with 8.8 K/9 and 3.97 BB/9 in 238 1/3 innings during that span. Richards could now factor into the Rays’ rotation, which lacks traditional starters after Charlie Morton and Yonny Chirinos, or their bullpen.

Stanek, 28, had been one of the faces of the Rays’ revolutionary “opener” idea prior to this trade. He “started” in 56 of 100 appearances for the club dating back to last season, though Stanek’s outings were fairly short. He was extremely effective in that role, though, having registered a 3.17 ERA/3.64 FIP with 10.48 K/9 and 3.47 BB/9 in 122 innings going back to last year. In Stanek, the Marlins are getting a hurler who’s not eligible for arbitration until after 2020.

Sanchez, 21, ranked as MLB.com’s fourth-best Rays prospect before the trade. The outlet regards him as “at least an above-average defender with a strong arm” and “a potential middle-of-the-order run producer.” However, Sanchez has fallen flat since earning a promotion to Triple-A Durham earlier this season. He carries a .206/.282/.317 line with one homer in 71 plate appearances at the minors’ top level.