The Diamondbacks officially have a new right fielder, as they formally announced Monday that they’ve signed Kole Calhoun to a two-year deal with a club option for a third season. The PSI Sports Management client will earn a reported $16MM in guaranteed money: $6MM in 2020, $8MM in 2021 and at least a $2MM buyout on a $9MM option for the 2022 season. 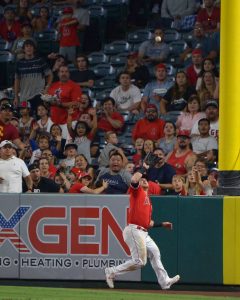 The 32-year-old Calhoun reached the open market Nov. 4 when the Angels declined his $14MM club option in favor of a $1MM buyout. However, for the Angels, that decision likely had more to do with a desire to spread that money around to other need areas (and star outfield prospect Jo Adell’s forthcoming arrival) than deficiencies on Calhoun’s part. After all, for the most part, Calhoun was a solid producer with the Angels. From his first full season in 2014 through last year, he posted at least 2.0 fWAR five times.

Last season was another quality showing for Calhoun, who logged 2.5 fWAR while mashing a career-high 33 home runs across 632 plate appearances. While Calhoun did strike out a personal-high 25.6 percent of the time, he also drew walks at an all-time clip of 11.1 percent. In all, his .232/.325/.467 batting line came in 8 percent above the league average, per FanGraphs’ wRC+ metric, and fell in line with his career mark of 105.

Calhoun has established himself as a useful hitter, though defense is likely his calling card. Defensive Runs Saved assigned the big-armed Calhoun a minus-1 mark in right field last season, but his career has been a different story (plus-12). Meanwhile, as has typically been the case, Ultimate Zone Rating was fond of his most recent performance in right (plus-5.1 in 2019, plus-30.0 overall).

Calhoun’s now heading to his home state, where he once thrived for the Arizona State Sun Devils, and figures to enter 2020 as the Diamondbacks’ No. 1 option at his customary position. He’s set to join Ketel Marte (center) and David Peralta (left), essentially replacing 2019 starter Adam Jones, who’s now playing in Japan. Considering the way their careers have gone of late, Calhoun should provide an upgrade over the replacement-level numbers Jones gave the Diamondbacks in 2019. Beyond that, the hope for Arizona is that he and the team’s highest-profile offseason pickup, left-hander Madison Bumgarner, will help push an 85-win roster from last season into the playoffs next year.