An already impressive Reds rotation became deeper Wednesday, as the team announced the signing of left-hander Wade Miley to a two-year contract worth a guaranteed $15MM. (The Reds, unlike most clubs, revealed the basic contractual terms themselves.) The pact also contains a club option for the 2022 season that is reported to be worth $10MM and comes with a $1MM buyout. Miley, a client of O’Connell Sports Management, will earn $6MM in 2020 and $8MM in 2021, and he can reportedly take home another $500K annually via an incentives package. The contract nearly matches the two-year, $16MM prediction MLBTR made for Miley at the outset of free agency. 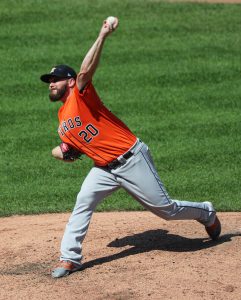 Miley, 33, gives the Reds a southpaw option to add to a rotation that already included a highly talented quartet of right-handers: Luis Castillo, Sonny Gray, Trevor Bauer and Anthony DeSclafani. At least on paper, plugging in Miley as the last member of the group upgrades the Reds’ rotation and improves their chances of breaking a six-year playoff drought in 2020.

Miley was also a free agent in each of the past couple offseasons, but this is the best the well-traveled hurler has done on the open market thus far. After settling for a minor league deal and reviving his career as a member of the Brewers in 2018, Miley joined the Astros for a $4.5MM guarantee last winter.

That proved to be a decent deal for both sides, as Miley — despite continuing to throw fastballs in only the 90 mph range — helped the Astros to an AL West title with 167 1/3 regular-season innings of 3.98 ERA/4.51 FIP ball with 7.53 K/9, 3.28 BB/9 and a 49.7 percent groundball rate. He wasn’t without his warts, though, as a brutal stretch of starts in September eventually led to Miley being omitted from the Astros’ World Series roster. Nevertheless, Miley’s body of work over the past two seasons is undeniably solid and has clearly convinced many in the industry that he’s again a viable rotation piece.

For Miley, heading to Cincinnati reunites him with pitching coach Derek Johnson. It was Johnson, then Milwaukee’s pitching coach, who helped bring Miley’s career back to life a couple years ago. And now that the Reds’ rotation appears to be complete, they’re free to turn their focus to other needs (shortstop? Catcher? Outfield? Bullpen?) as they continue to seek a return to relevance.

From a payroll vantage point, the team should have some financial breathing room in order to further add to the existing roster. Roster Resource’s Jason Martinez projects a $124MM Opening Day payroll that is a stone’s throw away from last year’s Opening Day mark of roughly $126MM, but owner Bob Castellini and the Reds’ front office have preached aggression as they’ve moved from a longstanding rebuilding effort and shifted into a win-now mentality in what looks to be an increasingly vulnerable NL Central division.