The Brewers have struck a deal with veteran infielder Eric Sogard, according to Ken Rosenthal of The Athletic ( Twitter links). It’s said to be a one-year, $4.5MM arrangement that includes an option for another campaign. 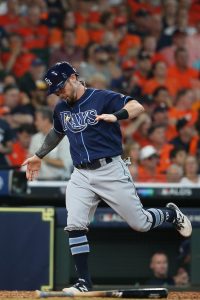 Sogard returns to Milwaukee after an up-and-down stint with the club from 2017-18. When last he suited up for the Brew Crew, Sogard proved unable to repeat a strong 2017 season in which he walked more than he struck out and delivered his first-ever above-average offensive effort.

After that disappointing turn, Sogard secured a minor-league deal with the Blue Jays. He earned his way up rather quickly and ended up producing an even more interesting season with the bat. Over 442 plate appearances, before and after a mid-season trade to the Rays, Sogard popped 13 home runs and delivered a .290/.353/.457 batting line.

Sogard’s surprising burst obviously coincided with a general power wave. He also benefited in particular from some wall-scraping dingers that he rode out with a much-steepened average launch angle. We examined the topic in the approach to the trade deadline. As it turned out, Sogard hit just three dingers and slugged .404 in his 119 plate appearances with Tampa Bay, so perhaps there’s added cause to wonder whether that will continue.

No doubt the Brewers have a good sense of how much power to anticipate from Sogard. They’re also amply familiar with his other qualities, including an exceptional eye and contact ability. Sogard delivers well-regarded glovework at second base, the ability to line up just about anywhere on the field, and a track record of adding runs with his legs.

The Milwaukee roster has seen quite a lot of change in the infield already this winter. Mike Moustakas, Travis Shaw, Eric Thames, and Hernan Perez all hit the open market. The club has now added Luis Urias, Ryon Healy, and Sogard as at least a partial slate of replacements.