6:06pm: The Braves have announced the deal and confirmed the terms of the agreement.

6:01pm: The Braves have agreed to a one-year deal with free-agent outfielder Marcell Ozuna, reports Jeff Passan of ESPN.com. The MDR Sports Management client will receive an $18MM salary that slightly exceeds the $17.8MM qualifying offer from the Cardinals that he rejected back in November. 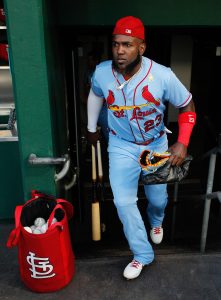 The market for Ozuna has been tepid, with the Cardinals and Rangers reported as the primary suitors for much of the winter. That likely changed when Atlanta missed out on third baseman Josh Donaldson, who agreed to a four-year deal with the Twins last week. Adding Ozuna to the lineup won’t account for the loss of Donaldson’s production, but it nonetheless bolsters a lineup that already won the division in 2018 and 2019.

Ozuna will presumably join Ender Inciarte (center) and Ronald Acuna Jr. (right) in comprising the Braves’ regular outfield trio. Inciarte and fellow outfielders Nick Markakis and Adam Duvall will likely lose some at-bats as a result of the signing, which gives the Braves a deep and talented mix from which to draw.

That 2018-19 production aligns with the output that Ozuna showed in 2014-16 — raising the question of whether the 2017 season is repeatable or simply an outlier. Notably, there are some encouraging factors that suggest Ozuna could have more in the tank than he showed during his time with the Cardinals. His average exit velocity and hard-hit rate were both elite, per Statcast, as were his expected batting average, expected slugging percentage and expected wOBA. Ozuna also posted a career-high 11.3 walk rate that easily topped his previous career-best of 9.4 percent and trounced the 6.9 percent career mark he carried into 2019.

Defensively, Ozuna comes with plenty of uncertainty. He won a Gold Glove in 2017 with the Marlins, but his ongoing shoulder troubles completely sapped his throwing ability in 2018. Defensive Runs Saved and Ultimate Zone Rating both still graded him as an above-average fielder thanks to his range, although Statcast’s Outs Above Average metric pegged him at -9 over the duration of his two-year stint in St. Louis. At the very least, he should’t be a major liability for the Braves, and there’s the potential that he’ll actually deliver plus glovework if he’s at full strength.

The other ripple effect for the Braves is that bringing Ozuna into the fold cements Austin Riley’s return to the infield mix. He and Johan Camargo are now the likeliest options for the Braves at third base, but it’s at least plausible that the club could look into options on the trade market. However, Ozuna’s contract pushes the Braves up to a franchise-record $158MM projected cash payroll, and perhaps even more surprisingly, they’re at $186MM in payroll as calculated for luxury tax purposes, per Roster Resource’s Jason Martinez. A Nolan Arenado acquisition has long appeared unlikely but looks even less plausible now, as acquiring him would push the Braves over the luxury threshold for the first time in franchise history. Even a deal to bring Kris Bryant over from the Cubs would leave Atlanta just a couple million shy of the $208MM barrier.

While the deal is a sensible one for the Braves, it’s hard to view it as anything other than a disappointing outcome for Ozuna. He’ll take home the largest salary of his career and slightly beat the qualifying offer value, but this isn’t the multi-year deal that most envisioned for the 29-year-old at the outset of free agency. We at MLBTR expected that he could struggle to secure the type of four- or five-year pact that some had forecast, but our prediction of a three-year, $45MM deal still proved too aggressive.

On the plus side for Ozuna, he’ll pocket that hefty one-year salary and reenter the free-agent market next winter at a relatively youthful 30 years of age. There’ll be even greater competition on the outfield market next time around, when Mookie Betts and George Springer are among the top-ranked free agents on the market, but Ozuna won’t have a qualifying offer hanging over his head. Additionally, it’s possible that some big-spending clubs who are in the midst of quiet offseasons — e.g. Cubs, Red Sox, Giants — will be more apt to engage in the open market.

As for the Cardinals, the fact that Ozuna settled on a one-year deal backs up recent reporting from Derrick Goold of the St. Louis Post-Dispatch indicating Ozuna wasn’t a priority for the team. Other reports of the St. Louis organization’s interest in keeping Ozuna in the fold appear to have been overstated, and the outfielder’s ultimate price point only reinforces recent comments from Cardinals owner Bill DeWitt Jr. which suggested that another splash might not be in the forecast.

It’s hard not to point out that Ozuna’s 2020 salary will line up almost perfectly with the $18.5MM owed to Matt Carpenter, who signed a two-year extension last spring that now looks to be regrettable for the Cardinals. Keeping Ozuna or acquiring a third baseman might’ve been more of a priority had Carpenter hit free agency this winter, as he would’ve without signing that new contract. Instead, the organization is left hoping for a rebound from the 34-year-old Carpenter, who slashed .226/.334/.392 in 2019.

The Cardinals won’t be left entirely empty-handed with Ozuna out the door, though. They’ll get a compensatory draft pick following Competitive Balance Round B in this summer’s draft — a selection that should fall in the upper-70s. The Braves, meanwhile, will surrender their third-best pick in next year’s draft in order to sign Ozuna, although they’re also set to acquire a compensatory pick for the loss of Donaldson, which helps to mitigate the damage.

With Ozuna off the market, Nicholas Castellanos is the clear-cut top free agent remaining. He and fellow free-agent Yasiel Puig represent the top two options on the market for clubs still seeking corner outfield upgrades. Ozuna’s subtraction from the pool of available talent could help the market for one or both outfielders move closer to a resolution.