6:35pm: The Dodgers have announced the signing. 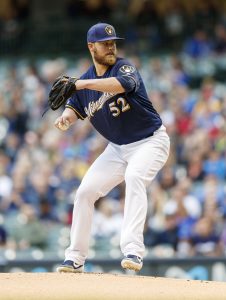 Nelson will reportedly be promised just $750K this year. But he’ll earn $1MM in incentives if he makes the Opening Day roster and $500K apiece if he remains on it for 45 and 90 days. Further incentives could also add $1.5MM to Nelson’s 2020 earnings.

As for the option, it will start out as a $2MM club option with a $500K buyout that makes up the remainder of the guaranteed cash. If Nelson throws sixty innings and/or makes forty appearances, it’ll convert to a $5MM mutual option. That price can reach as much as $9MM if Nelson throws 170 frames for Los Angeles in the coming season.

Once a foundational player in Milwaukee, Nelson was non-tendered by the Brewers in December when the club deemed his projected $3.7MM salary too steep. That decision came on the heels of two injury-ruined campaigns.

Nelson did get back on the hill in 2019 after missing the entirety of the prior season, but allowed 17 runs over 22 frames. While he racked up 26 strikeouts in that span but also coughed up 17 walks and four long balls.

It’s hard to know what to expect out of Nelson, who’s now thirty years of age. He exhibited a fairly significant velocity loss but still sat at around 93 mph in 2019. He dove in both first-strike rate (50.5%) and chase rate (23.6%), suggesting some reduction of command, pitch quality, and/or confidence. But Statcast still identified well-above-average spin on Nelson’s pitches.

It will be interesting to watch whether Nelson can return from the shoulder and elbow woes that derailed his career. It’s equally fascinating to see another upside pitching play from a Dodgers organization that has otherwise remained quiet this winter. While the club continues to explore major additions, it has yet to pull off a big strike this winter.