February 12: The Giants have announced the signing, adding that right-hander Reyes Moronta has been transferred to the 60-day injured list to open a spot on the 40-man roster. Moronta underwent shoulder surgery late in the 2019 season and is expected to miss substantial time in 2020.

February 4, 7:00pm: Flores’ contract with the Giants is a two-year deal worth more than $6MM guaranteed, tweets MLB Network’s Jon Heyman. The Giants will also have a club option for a third season.

2:40pm: The Giants and free-agent infielder Wilmer Flores have agreed to a multi-year deal, ESPN’s Jeff Passan reports (via Twitter). The Giants will need to make a 40-man roster move in order to create space for him. 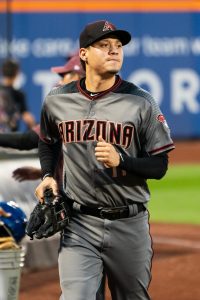 The 28-year-old Flores spent the 2019 season with the division-rival Diamondbacks but was limited to 89 games by a foot injury that sidelined him from late May until late July. When healthy, Flores turned in a strong .317/.361/.487 batting line with nine home runs and 18 doubles in 285 plate appearances. While most of Flores’ power output came against left-handed pitching (.337/.367/.615), the longtime Mets utilityman also hit for average and got on base against righties, albeit without much extra-base pop (.304/.358/.404).

The exact manner in which Flores fits into the Giants’ infield rotation isn’t clear. He can back up Brandon Belt at first base and Evan Longoria at third base, although it’s likely that non-roster invitee Pablo Sandoval will also be viewed as a backup at the corners. Flores could log semi-regular reps at second base, with Donovan Solano serving in a traditional utility role, although that doesn’t leave regular at-bats for young Mauricio Dubon at the position. Dubon, though, has been working out in the outfield and could earn himself a lengthy audition in center field, which would help to create additional playing time for Flores at second base.

Bringing Flores aboard on a multi-year agreement doesn’t bode well for 2019 Gold Glover Yolmer Sanchez, who agreed to a minor league contract with San Francisco just last week. Sanchez reportedly passed on big league offers for the chance to earn himself regular playing time at second base with the Giants, but the acquisition of Flores doesn’t help his chances any.

Looking further ahead, the Giants still have Belt, Longoria and Brandon Crawford all signed to guaranteed contracts through at least 2021, so there’s no creation of an everyday spot for Flores on the horizon. That’s nothing new for Flores, however. He’s typically appeared in more games and logged more plate appearances than your average bench bat but has also only topped 500 plate appearances once in seven Major League seasons.