It could have easily been Anthony Rendon.  The media certainly believed the Mariners would draft Rice’s star third baseman with the second overall draft pick in 2011, despite injury concerns.   Former Mariners GM Jack Zduriencik recently told Corey Brock of The Athletic, “We liked Rendon…a lot.  Going into the draft, he was probably the player a lot of people thought we were going to take…and we did, too.”

Most observers expected the Pirates to use the first overall pick on UCLA righty Gerrit Cole, and indeed they did.  That scenario left two strong possibilities for the Mariners: Rendon, and University of Virginia lefty Danny Hultzen.  Rendon was considered by some to be the top talent in the 2011 draft even with recent ankle and shoulder injuries.  But those injuries loomed large for the Mariners, with Zduriencik telling Brock, “Anthony had some physical issues. He’d been hurt the year before and was limited somewhat. There were a few things that were concerning.” 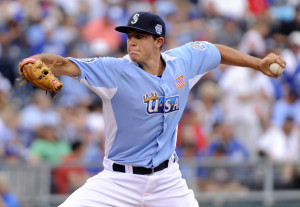 You can debate whether it’s fair to criticize the Mariners’ choice of Hultzen in hindsight.  Zduriencik told Brock, “Danny was the guy who everyone loved. It made a lot of sense.”  But while Hultzen was by no means a reach or a bad pick at the time, he was considered the “safe” choice.  After Day 1 of the draft, Keith Law (then of ESPN) said the Mariners “shock[ed] everyone,” elaborating, “I’m not criticizing Hultzen in the least here, but I think drafting at No. 2 overall is a rare chance to go for ceiling, and the Mariners didn’t do that. They took a very safe, very good college pitcher who will move quickly but doesn’t have No. 1 starter upside.” Unfortunately, even the safest pitchers carry extreme risk, and Hultzen’s career was all but wiped out by shoulder issues.

No one could have foreseen that the draft’s best player would turn out to be Mookie Betts, as the Red Sox landed him 172nd overall.  But the draft gurus were correct on Rendon, who ultimately has been the second-most productive member of his draft class by measure of Baseball-Reference WAR.  And that was a draft that included Cole, Francisco Lindor (also of interest to the Mariners), George Springer, Trevor Story, Javier Baez, and many other excellent players. 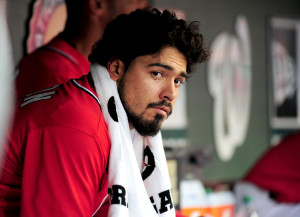 To the surprise of the baseball world, the Pirates, Mariners, Diamondbacks, Orioles, and Royals all decided to pass on Rendon.  Maybe it was the ankle and shoulder injuries, maybe it was adviser Scott Boras, but whatever the reason, Nationals GM Mike Rizzo was “pleasantly surprised” when Rendon fell all the way to the sixth spot.  The Nationals went with who they considered to be the best player available, even with Ryan Zimmerman entrenched at third base.  That choice paid off in a huge way for the Nationals.  But with apologies to Mariners fans, let’s consider an alternate universe where Zduriencik called Rendon’s name instead of Hultzen’s on June 6th, 2011.

Rendon reached the Majors in 2013 and had his first highly productive season in 2014.  By that point, Kyle Seager was already established as the Mariners’ third baseman.  Seager’s 18.4 fWAR run from 2013-16 was actually much better than what Rendon did, albeit with a slightly lower ceiling.  As with the Nationals, Rendon would have likely been shifted to second base as a rookie to accommodate the incumbent third baseman.

The Mariners had used the second overall pick in the 2009 draft on Dustin Ackley, whom they decided to shift to second base the following year.  Ackley never hit like the Mariners (and everyone else) expected him to, nor did he take to playing second base, so the club gradually shifted him to the outfield starting in 2013.  Second base would have been the primary infield opening for a top prospect, since Brad Miller came up around the same time to take over at shortstop.  In real life, the Mariners had a quality middle infield prospect coming in Nick Franklin.  Franklin was capable of playing shortstop but seen as more of a second baseman.  Even with Ackley in the outfield and Miller at shortstop, Seager’s success at the hot corner would likely have left Rendon and Franklin to battle for the Mariners’ second base job as rookies in 2013.

Franklin was a top 50 prospect prior to 2013 and he had an OK showing as a rookie that year, but it wasn’t enough to prevent the Mariners from signing Robinson Cano to a franchise-altering ten-year, $240MM free agent contract that offseason.  Rendon’s real-life rookie showing was similarly mediocre, though he was more highly-regarded than Franklin.

Franklin became a popular trade chip once Cano signed in Seattle.  The Mariners ultimately parted him at the 2014 trade deadline in the deal that netted them center fielder Austin Jackson and landed David Price in Detroit.  With Cano in the fold, would the Mariners have traded Franklin, Rendon, or both?  And when?  The Mariners may have been more willing to part with at least one of them during the offseason rather than at the trade deadline, and were known to have interest in Price.

Or, would the presence of two promising second basemen have led the Mariners to spend their money elsewhere?  Though Cano was the biggest fish that winter, that was also the point where the Yankees signed Masahiro Tanaka and Jacoby Ellsbury and the Rangers signed Shin-Soo Choo.  The Mariners never seemed to be in play for Ellsbury despite his Northwest roots, but Tanaka or Choo would have been viable financially if not for the Cano signing.  In the end, Cano performed well in his five seasons with the Mariners, and though they had to include Edwin Diaz and a lot of cash, Cano was part of the reason the Mets were willing to part with Jarred Kelenic in December 2018 (more on that here).  In a roundabout way, if the Mariners had drafted Rendon, they might not have Kelenic now … though they might have other appealing players instead.

If the Mariners’ hypothetical second base surplus would have prevented them from trying to upgrade the position in the 2013-14 offseason, what would have become of Cano?  A return to the Bronx was the prevailing guess in November of 2013, yet the Yankees reportedly topped out at a $175MM offer for Cano despite going on a spending spree on other players.  Would Cano have swallowed that alleged lack of respect and remained a Yankee?  Or would some other team have stepped up to fill the void?

The Dodgers sat out the Cano bidding that winter.  The Mets took a meeting with Cano’s agent Brodie Van Wagenen, their future GM, but the team might have just wanted the chance to meet Jay-Z.  Beyond the Yankees and Mariners, there was never another serious suitor for Cano that winter, at least as it was known to the public.  If somehow the hypothetical presence of Rendon would have reduced the Mariners’ interest in Cano, the logical conclusion is that he would have returned to the Yankees — at much less than $240MM.

But the Mariners went into that winter intending to make a big splash, and it’s quite possible they would have traded Franklin for pitching, kept Rendon, and signed Cano.  In reality the Cano signing mostly tapped out the Mariners’ budget, and they traded for the affordable Logan Morrison to split time at first base with Justin Smoak in 2014.  Though it would been a waste of his defensive talents, might the Mariners have found a temporary home for Rendon at first base?  The 2014 Mariners fell one win shy of a Wild Card berth, a season in which Rendon was worth 6.4 fWAR while Morrison and Smoak combined for 0.6.  It’s not too hard to picture a 2014 Mariners club with Rendon, Cano, and a pitcher acquired for Franklin overtaking the Royals in the Wild Card game and maybe even making a deep playoff run.

Even a 2014 playoff run might not have been enough to save Zduriencik’s job, given all the things that went wrong in 2015.  So even in our alternate Mariners universe, Jerry Dipoto still takes over as GM in 2015 and remakes the team in his image.  Rendon might have been enough to put the Mariners in the playoffs in 2016 and/or ’18, changing the trajectory of the franchise.  In reality, the Mariners continue to suffer through the longest postseason drought in the sport.

The implications of the Mariners choosing Hultzen over Rendon nine years ago can make your head spin, and we didn’t dive into the hypothetical consequences of the Yankees keeping Cano, the Nationals drafting someone else sixth overall, or the Diamondbacks, Orioles, or Royals drafting Hultzen instead of Trevor Bauer, Dylan Bundy, and Bubba Starling.  Feel free to do so in the comments or let us know how you think things might have played out had the Mariners drafted Rendon.