Dr. Matt Swartz is a Labor Economist who has researched and published on MLB labor markets for over a decade at websites including The Hardball Times, FanGraphs, and Baseball Prospectus, as well as at MLB Trade Rumors. Matt created the arbitration salary projection model for MLB Trade Rumors, and co-created the SIERA pitching statistic available at FanGraphs. He has consulted for a Major League team since 2013, in addition to working in his day job as an economist in the cable industry. This article reflects his own opinion and not that of any of his employers or clients.

To understand why, all we need is a superficial understanding of labor economics. Baseball’s free agent market follows those models better than perhaps either side realizes. Owners offer free agents certain salaries because they believe that their labor will generate as much money in revenue. Yet owners primarily get their revenue from two sources: tickets and television.

Since what free agents are actually selling is wins, the translation from ticket revenue to free agent salaries is obvious. Teams sell more tickets when they win more games. Especially if those wins push them further in the playoffs, they sell substantially more season tickets in subsequent seasons. Teams readily pay free agents with this in mind.

Yet the translation from television revenue to free agents is virtually nonexistent. National television deals with ESPN, TBS, and FOX are distributed to all teams, regardless of how many games they win. Regional Sports Networks often sign multi-decade contracts with teams to broadcast their games, which also are unaltered by win totals in a given season.

The reason this matters, and the reason this is a source of acrimony between the owners and players now, is that television revenue has grown far more quickly than ticket revenue. Player salaries have grown in magnitude about as much as ticket revenues have— suggesting this theory is likely true. Owners have seen higher profits from faster growing television revenue.

Consider my rough estimates in the graph below. Here I have used Baseball Prospectus payroll totals, approximate average ticket prices from various sources, average attendance from Baseball Reference, and Maury Brown’s (now unavailable) BizOfBaseball.com website and Forbes articles for total revenue. None of these figures are exact but they are certainly close enough that the message and pattern is obvious. Players have seen salary growth (red) almost exactly in accordance with the growth rate of ticket revenues (green), while owners’ profits have grown more quickly as they pocket the faster-growing television revenue (blue). This is not the owners pulling the wool over the union’s eyes—it is just the structure of their agreements in which the payroll share of revenue is not fixed as it is in other sports, but tied to owner incentives that have not kept up with total revenue. 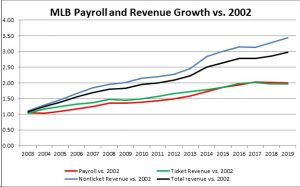 A starting point is simple. Instead of minimum salaries defined exactly by the CBA, let free agent and arbitration prices be set in excess of the salary minimums, and set future salary minimums distributed to all players. Let those minimums represent some fixed X% of the cumulative national television deals. Bargain about that percentage, but when TBS offers 40% more in their next deal than their current deal, players will see that upside. In exchange, when future identifiable events lower ticket revenue— e.g. say government regulations of Y% reduced capacity in stadiums due to COVID-19 in 2021– the players will accept lower salaries by Z%. This gives players exposure to upside and gives owners protection from downside. Everything else is bargaining around X, Y, and Z%.

Now is the time for the players to request this. Now is the time for the owners to offer this. It need not even be for 2020– that ship may have sailed already. By right now, there is downside risk associated with empty seats associated with 2021. If owners want players to assume lower salaries in such a situation, they should make an offer to give the players a piece of future television revenue growth now. Otherwise, the players will again be asking the owners the same question next year: “Why should we accept this downside risk?”