10:26pm: Both teams have announced the trade.

9:15pm: The Athletics have acquired infielder Tommy La Stella from the division-rival Angels, Ken Rosenthal of The Athletic reports. Fellow infielder Franklin Barreto is headed to the Angels, per Rosenthal. 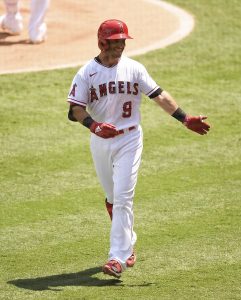 Now 31 years old, La Stella was a capable part-time player with the Braves and Cubs from 2014-18, but he has found another gear since joining the Angels before last season. Going back to 2019, La Stella has slashed .289/.353/.483 (125 wRC+) with 20 home runs and as many walks as strikeouts (35). La Stella even earned his first All-Star nod a season ago, though he was unable to play in the game after suffering a fractured tibia.

To his credit, La Stella has come back strong from his injury this year. He could soon emerge as the No. 1 option at second base for a contending Oakland club that has relied on Tony Kemp to handle the position so far.

Although La Stella was terrific as an Angel, they’re well out of contention, and he’s a pending free agent. As such, it made sense for the club to move on from La Stella and take on the 24-year-old Barreto, a former top prospect who didn’t receive consistent playing in Oakland.

Originally acquired from the Blue Jays as part of the two teams’ Josh Donaldson trade before 2015, Barreto batted a woeful .180/.210/.360 with nine homers in 219 plate appearances as an Athletic, and he has totaled just 10 trips to the plate this year. However, in addition to his prospect pedigree and youth, Barreto owns a strong track record in Triple-A, where he has hit .285/.356/.505 with 53 HRs in 1,285 PA. The Angels are obviously hoping Barreto will tap into his potential in their uniform, but because he’s out of minor league options, they won’t have the luxury of demoting him without possibly losing him.

Defensively, most of Barreto’s MLB playing time has come at second, where La Stella and Luis Rengifo have gotten the lion’s share of action for the club this year. But as the Angels go through the final month of what’s very likely to be another non-playoff season, they should be in position to evaluate Barreto as a possible everyday option at the keystone. The A’s, on the other hand, are taking a chance that La Stella will provide yet another weapon on a team aiming for an AL West title and a World Series this year.