Mets second baseman Robinson Cano has tested positive for a performance-enhancing substance, ESPN’s Jeff Passan reports (via Twitter). The league confirmed minutes after Passan’s report that Cano has tested positive for Stanozolol. Because this is Cano’s second PED ban — he also tested positive with the Mariners back in 2018 — he’ll be suspended for 162 games. Cano will spend the 2021 season on the restricted list and will not earn any of his $24MM salary ($3.75MM of which was to be paid by the Mariners). 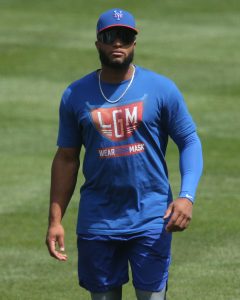 Presumably, if the 2021 season is shortened at all due to the ongoing pandemic, Cano’s suspension would carry over into the 2022 campaign. He’s still signed through 2023 at that same $24MM annual rate under the terms of the 10-year, $240MM deal he signed in Seattle back in December 2013.

The pair of PED suspensions will unquestionably sully what otherwise looked like a potential Hall of Fame career. Cano, an eight-time All-Star, has taken home five Silver Slugger Awards, two Gold Gloves and posted a superlative .303/.352/.492 batting line with 334 home runs, 571 doubles, 33 triples, 1257 runs scored an 1303 runs driven in. He’s also racked up 2624 career hits, which would’ve given him a chance at cracking the illustrious 3000-hit barrier were it not for this latest suspension. He’ll still technically have an outside chance, but a pair of 188-hit seasons at ages 39 and 40 don’t seem likely.

The 38-year-old struggled through a dismal 2019 season in Queens, hitting just .256/.307/.428 in a season that will be remembered for the juiced ball and record levels of offense throughout the league. Cano put together what looked to be a a terrific bounceback effort in 2020 with a .316/.352/.544 slash in 182 plate appearances, although this latest PED revelation obviously tarnishes the legitimacy of that production.

That strong showing notwithstanding, Cano’s suspension will work to the Mets’ benefit from a roster construction standpoint. Incoming owner Steve Cohen was already expected to be among the game’s most aggressive owners in an offseason where most clubs will be looking to recoup lost revenues.

Cano’s suspension not only opens up $20.25MM of unexpected payroll space in 2021 but also paves a clearer path for the Mets to put Jeff McNeil back at second base if they see fit. That makes for a cleaner alignment of J.D. Davis at the hot corner with a possible outfield alignment of Dominic Smith in left, Brandon Nimmo in center and Michael Conforto in right. Of course, given the aforementioned spending capabilities the Mets possess under Cohen, it’s quite likely that the current alignment will be altered by offseason additions, be they via the free-agent market or trade market.

Already, the Mets have been listed as a potential suitor for top free agents such as Trevor Bauer, J.T. Realmuto, George Springer, DJ LeMahieu and Marcell Ozuna. Similarly, they’ve been suggested as a speculative trade partner for the Mets when they inevitably move Francisco Lindor this winter. The additional payroll capacity only strengthens their ability to pursue such upgrades.