TODAY: The Dodgers have officially announced the signing.

DECEMBER 23: The Dodgers and right-hander Tommy Kahnle are in agreement on a two-year deal that will reportedly guarantee the right-hander $4.75MM and allow him to earn an additional $750K via incentives. The Athletic’s Ken Rosenthal first reported the agreement, which will pay Kahnle $750K in 2021 and $3.45MM in 2022 (as reported by MLB Network’s Jon Heyman and MLB.com’s Mark Feinsand, on Twitter). Kahnle is represented by the Ballengee Group. 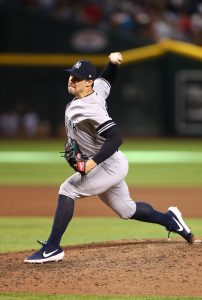 Kahnle, 31, pitched just one inning with the Yankees this season before undergoing Tommy John surgery in August. The Yankees outrighted him off the 40-man roster at season’s end, at which point Kahnle elected free agency. He has five-plus years of Major League service time, meaning he was scheduled to become a free agent following the 2021 season anyhow. Given that he’s unlikely to pitch much next season and could miss the entire year, it was only logical that the Yankees cut him from the 40-man roster.

A reunion between the Yankees and Kahnle hasn’t seemed likely with the Yanks seemingly intent on remaining south of the luxury tax threshold, as a backloaded two-year deal for Kahnle would come with some degree of luxury ramifications based on its average annual value. His two-year deal will follow a recent trend of multi-year contracts for pitchers rehabbing from Tommy John surgery. Recent examples of such contracts include Nathan Eovaldi’s two-year deal with the Rays, Michael Pineda’s (first) two-year deal with the Twins and Drew Smyly’s two-year pact with the Cubs.

In Kahnle, the Dodgers will be getting a potential impact arm to add to their late-inning mix in 2022, when Kenley Jansen’s five-year pact will have run its course. Joe Kelly’s three-year pact will also be up, though L.A. holds a $12MM club option on him for the 2022 campaign. Although Kahnle struggled through a disastrous 2018 season, he was terrific in 2016-17 and quite good in 2019 as well. He only pitched one (scoreless) inning in 2020 before going down with the injury that led to his surgery, however.

All told, Kahnle carries a 3.48 ERA and 3.05 FIP in 175 2/3 innings dating back to the 2016 season. Along the way, he’s averaged 12.4 strikeouts, 3.7 walks and 0.92 home runs per nine innings pitched. The hard-throwing Kahnle has averaged 96.8 mph on his heater in that time, which has helped contribute to an excellent 15.9 percent swinging-strike rate and a 32.8 percent opponents’ chase rate on pitches outside the strike zone.

With Jansen and Kelly perhaps both off the roster by the time Kahnle is able to pitch for the Dodgers, he’ll be joining what should be a much different-looking relief corps. Flamethrowing Brusdar Graterol will be given the opportunity to further work his way into the late-inning mix this year and could factor prominently into that group. Right-hander Dylan Floro and lefties Victor Gonzalez, Adam Kolarek and Scott Alexander are all under club control into the 2022 season as well.