DEC. 18: The Giants are deferring half of DeSclafani’s salary, including incentives, to the first quarter of 2022, according to Bob Nightengale of USA Today.

DEC. 16, 4:06pm: The Giants have announced the signing. The deal comes with up to $250K in performance bonuses based on innings pitched, per Alex Pavlovic of NBC Sports Bay Area.

3:27pm: The two sides have agreed to a one-year, $6MM contract, Ken Rosenthal of The Athletic tweets. That comes in north of MLBTR’s one-year, $4MM prediction for DeSclafani.

3:08pm: The Giants and free-agent right-hander Anthony DeSclafani are nearing a deal, Susan Slusser of the San Francisco Chronicle reports. DeSclafani is a client of VC Sports Group. 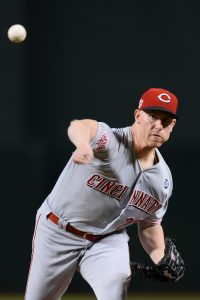 This figures to be a buy-low pickup for the Giants, who are set to add a starter who has gone through an up-and-down career since it began in 2014. DeSclafani was a member of the Marlins during his first season, but he moved on to the Reds after that in a trade that sent fellow righty Mat Latos to Miami.

Although last season was no doubt a disaster for DeSclafani, the Giants have done well recently in signing starters to low-risk contracts. They added one of DeSclafani’s former Reds teammates, Kevin Gausman, on a one-year, $9MM pact last offseason. That couldn’t have worked out much better for the Giants, who were so impressed that they issued Gausman a qualifying offer a few weeks back. Gausman accepted that $18.9MM offer and will be atop their rotation in 2021. Along with picking up Gausman a year ago, the Giants signed Drew Smyly to a $4MM guarantee. Smyly also exceeded expectations, though he left for a raise with the Braves earlier this winter.

Assuming DeSclafani is part of the Giants’ rotation next year, he should join a group that will include Gausman, Johnny Cueto and likely Logan Webb. The other spot will probably be up for grabs, especially with Andrew Suarez nearing an agreement with a team in the Korea Baseball Organization.