DEC. 2: The deal is official. It’s a $15.5MM guarantee, Jeff Passan of ESPN tweets. May could make another $250K in performance bonuses in each season.

1:37pm: The Mets have agreed to terms on a contract with free-agent reliever Trevor May, SNY’s Andy Martino reports (via Twitter). The contract is pending a physical. MLB.com’s Anthony DiComo reported earlier this afternoon that May and the Mets were “deep” in talks. May is represented by the VC Sports Group. 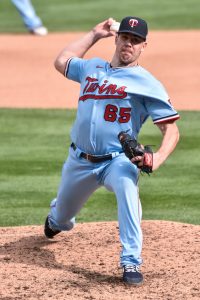 May, 31, becomes the first prominent reliever to come off the board. The longtime Twins righty bounced back from Tommy John surgery that wiped out his 2017 season to become a reliable, late-inning power arm in Minnesota and one of the game’s foremost strikeout pitchers.

Since returning from that elbow operation, May has compiled 113 innings of 3.19 ERA and 3.56 FIP ball, averaging 12.2 strikeouts, 3.0 walks and 1.4 home runs per nine innings pitched. This past season was particularly impressive for May in terms of missing bats, as he whiffed an outstanding 39.6 percent of the hitters he faced.

May’s fastball averaged a career-high 96.4 mph in 2020, although the righty threw the pitch at a greatly reduced 52.1 percent clip. In place of the heaters, the right-hander ramped up the use of his slider to a career-high 32.2 percent and did so to great success; May generated a 14.6 percent swinging-strike rate on his slider, and plate appearances he finished with that pitch resulted in opponents putting up a pitiful .167/.167/.250 batting line.

Because he works at the top of the zone with his four-seamer, May has trouble with the long ball at times. However he also generated a ridiculous 20.6 percent swinging-strike rate on his fastball thanks to high-end velocity and spin on the pitch. Overall, Statcast pegged May in the 99th percentile of Major League pitchers in terms of swinging-strike rate and in the 98th percentile in terms of overall strikeout rate in 2020. For a Mets club that already boasts several power arms at the back of the bullpen, May only adds more firepower.

Of course, many of those arms are in need of a rebound. It’s arguable that if Jeurys Familia, Dellin Betances and others had all pitched to their capabilities in 2020, the Mets might not have felt as motivated to make a push for an “early” deal with May. Still, pairing May with Edwin Diaz, Familia, Betances, Miguel Castro, Brad Brach and potentially Seth Lugo — depending on which direction the organization goes with him — gives the Mets a deep and talented mix of late-inning weapons, even if they there’s some considerable inconsistency among the bunch.

May was no doubt highly recommended and perhaps even personally recruited by Mets pitching coach Jeremy Hefner, who was the Twins’ bullpen coach prior to the 2020 season. Hefner, a former Mets pitcher, played a role in helping to coax a breakout from May and several other Twins relievers before being hired away by his former team.

The May signing is the first notable move of what most expect to be a highly active offseason for the Mets. While they’re still on the search for a new general manager, Sandy Alderson is back with the club under deep-pocketed new owner Steve Cohen and is calling the shots in baseball operations at the moment. With the game’s richest owner now in their corner, the Mets have already been linked to the majority of the top names on both the trade and free-agent markets.