The Rays added a veteran source of innings to their rotation Friday morning, announcing a one-year deal with right-hander Michael Wacha. The CAA client will reportedly land a $3MM guarantee on the heels of a rough 2020 season with the Mets. That’s the same salary (prior to pro-rating) that Wacha earned in New York last season. 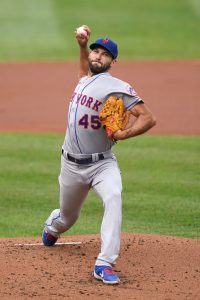 Wacha struggled through eight games with the Mets in the abbreviated 2020 season, pitching to a 6.62 ERA with a whopping nine home runs allowed in just 34 innings. His 2019 season was also rather lackluster campaign owing in no small part to knee and shoulder injuries — the latter of which has been a recurring issue throughout his career.

Despite the down showing, Wacha was reportedly a fairly popular target among free-agent starters due to his age and price point. The 2015 All-Star also logged a very strong 37-to-7 K/BB ratio in those 34 frames while seeing marked upticks in swinging-strike rate and opponents’ chase rate. His 11.3 percent swinging-strike rate trails only his 11.4 percent mark from his rookie campaign back in 2013, and Wacha’s 34.3 percent chase rate on pitches outside the strike zone was far and away a career-high. He won’t turn 30 until July, either, making Wacha younger than several other free-agent rotation options on the market.

Wacha’s average fastball velocity bottomed out with the Cardinals in 2019, sitting at a career-low 93 mph, per Statcast. He made some positive gains last year, sitting at 93.6 mph with the pitch, but he’s still a ways removed from his 95.1 mph peak back in 2017. He altered his pitch selection considerably in 2020, scrapping a once highly effective curveball to lean into a three-pitch mix featuring his four-seamer, cutter and changeup. The results weren’t great from a run-prevention standpoint, although the aforementioned gains in missed bats surely piqued the Rays’ interest.

Wacha is a sensible pickup for the Rays, who earlier this winter declined their $15MM club option on Charlie Morton but still have high-end starters Blake Snell and Tyler Glasnow to front the rotation. Depth, however, is more of an issue than usual for Tampa Bay, as each of Yonny Chirinos (Tommy John surgery), Jalen Beeks (Tommy John surgery) and Brendan McKay (shoulder surgery) went under the knife in the past several months. Chirinos and Beeks won’t pitch in 2021. McKay’s timeline is still muddy. Prior indications have been that he’ll be delayed in ’21 but eventually be able to take the mound.

With Wacha now on board, the Rays will presumably deploy a starting mix of Snell, Glasnow, Wacha and Ryan Yarbrough. Lefty Josh Fleming, righty Trevor Richards and top prospect Shane McClanahan are all candidates to claim permanent spots in the rotation as well. The Rays were also the club to popularize the usage of openers, so it’s possible they’ll eschew a set fifth starter entirely, instead gravitating toward less conventional means of pitcher use. The possibility of trading a more experienced starter can’t be written off, either, as Snell’s name has popped up on the rumor circuit at multiple points this winter.