The Dodgers have re-signed right-handed reliever Blake Treinen to a two-year, $17.5MM guarantee that includes an $8MM club option or a $1.5MM buyout for 2023, Bob Nightengale of USA Today was among those to report. Treinen is a client of Apex Baseball. MLBTR predicted he would land a two-year, $14.5MM guarantee at the beginning of the offseason. 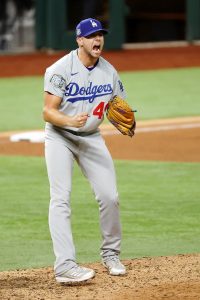 Treinen was something of a buy-low pickup for the Dodgers last winter, though they did have to guarantee the former Athletics standout $10MM. While he was then coming off a disappointing season in Oakland, the move paid off handsomely for the World Series-winning Dodgers, who got 25 2/3 innings of 3.86 ERA ball with a 20.6 percent strikeout rate, 7.5 percent walk rate, and a tremendous 64 percent groundball rate from Treinen. The 32-year-old continued to average upward of 97 mph on his fastball along the way.

Putting aside his issues in 2019, Treinen has been one of the game’s most productive relievers throughout his career. In all, Treinen has pitched to a 3.02 ERA with a 23.3 strikeout percentage and a 9.4 percent walk rate in 425 2/3 major league innings. At his best, Treinen – also a former National – gave the A’s 80 1/3 frames of 0.78 ERA ball in 2018. While Treinen does have 72 saves on his resume, he has so far served as a setup man for the Dodgers, who continue to rely on Kenley Jansen as their game-ending answer.

Treinen should keep working as a bridge to Jansen in 2021, and the Dodgers will continue to feature a formidable bullpen even beyond those two. The Dodgers’ relief corps finished the 2020 campaign with a National League-best 2.74 ERA, and though Jake McGee turned in an excellent year and is now a free agent, they did add former All-Star Corey Knebel earlier this offseason.