JAN. 22: 10:32am: Profar’s contract contains an opt-out clause after each of the first two seasons, tweets MLB Network’s Jon Heyman.

10:02am: The Padres have agreed to re-sign infielder/outfielder Jurickson Profar on a three-year, $21MM contract, reports ESPN’s Jeff Passan (via Twitter). Profar is represented by the Boras Corporation. 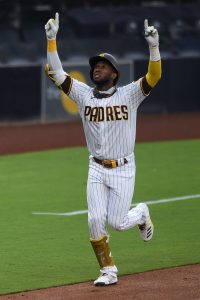 A new deal with Profar marks the latest strike in an ultra-aggressive winter for the Padres, who have already acquired Blake Snell, Yu Darvish and Joe Musgrove on the trade market in addition to signing Korea Baseball Organization superstar Ha-Seong Kim on a four-year deal. Kim’s ability to bounce around the infield and support the trio of Manny Machado, Fernando Tatis Jr. and Jake Cronenworth at any position likely means that Profar is again ticketed for more work on the outfield grass than in the infield, although his versatility will allow him to be deployed virtually anywhere skipper Jayce Tingler sees fit.

The three-year term on the Profar deal registers as a bit of a surprise, though the Padres had some competition for the soon-to-be 28-year-old. The Royals were known to have interest in Profar, and MLB Network’s Jon Heyman tweets that the Red Sox “tried hard” to sign Profar before he ultimately returned to San Diego.

The 2020 season was Profar’s first with the Padres, who acquired him last winter in a deal with the A’s. Profar got out to a disastrous start to the season but rode a sizzling hot streak over the final three-plus weeks of the season to finish out the year with a .278/.343/.428 batting line.

Profar’s season is representative of the difficulty in evaluating players on the heels of such a short year; the end results look solid, but it also should be noted that as late into the season as Aug. 27, Profar was batting .181/.291/.319. That was surely a cause of some concern for some clubs, as was the fact that Profar ranked in the 23rd percentile or worse in terms of exit velocity, hard-hit rate and barrel rate, per Statcast.

That said, Profar was clearly still a fairly in-demand free agent. That’s plenty understandable given that back in 2013, he was regarded as the consensus No. 1 prospect in all of baseball. Profar rocketed through the Rangers’ system after being signed as an amateur out of Curacao, making his MLB debut at just 19 years old in the final weeks of the 2012 season. Unfortunately for both him and for the Rangers, a pair of shoulder injuries led to multiple surgeries, wiping out two full years of development.

Profar never established himself as a regular in Texas, struggling to find playing time behind a veteran infield that included the likes of Adrian Beltre and an in-his-prime Elvis Andrus. Profar had an above-average year at the plate in 2018 as a utility player but still found himself traded to Oakland that winter — a match that didn’t pan out whatsoever. The A’s picked up Profar in hopes that he could solidify second base for his remaining two years of team control, but he battled a borderline case of the yips that resulted in a slew of throwing errors and batted just .218/.310/.401 in 139 games. Oakland traded him to San Diego after that lone year.

Three-year deal notwithstanding, Profar is in many regards still something of a project. The 2020 and 2018 seasons are the only two years he’s ever been at least average at the plate, and as this past season showed, he’s yet to find much consistency at the dish. That said, it was Padres general manager A.J. Preller who was running the Rangers’ international scouting operations when Profar originally signed as a 16-year-old. Based on not only the surprising size of the contract but also the multiple opt-out provisions, Preller seemingly remains a firm believer that Profar can match or exceed last year’s composite output.

That said, the inclusion of the two opt-out clauses effectively saps any upside for the Padres in this contract. If Profar reverts to his ways as a light-hitting utility piece without a position where he’s a true plus defender, the Friars will be on the hook for the full $21MM. If he, at any point, performs at an above-average level, he’ll surely head back to the open market in search of a larger deal — especially given his relative youth. The best outcome for the Padres would be for Profar to rake in 2021 and head back to market, and this contract structure is essentially a $21MM bet that that’ll be the case.

The Padres were already projected to open the season with a roughly $167MM payroll prior to their new deal with Profar. That would’ve been a franchise-record in its own right, but Friars ownership will continue to buck the common trend of shedding payroll taken by most clubs this winter, instead spending at new levels in their effort to dethrone the Dodgers, who have won eight consecutive division titles and, of course, toppled the Rays in the 2020 World Series. The $7MM annual value on Profar’s deal also pushed the Padres to more than $177MM in luxury-tax obligations.