7:49pm: Molina will earn $9MM, according to Jon Heyman of MLB Network. He’s a client of MDR Sports Management.

7:24pm: It will be a one-year agreement, Derrick Goold of the St. Louis Post-Dispatch tweets.

6:50pm: The Cardinals are nearing a deal to re-sign free-agent catcher Yadier Molina, Ken Rosenthal of The Athletic reports. This isn’t a remotely surprising development, as multiple sources reported a little over a week ago that Molina would remain in St. Louis.

Molina has been a Cardinal dating back to the 2000 draft, when they chose him in the fourth round. He debuted in the majors in 2004 and has since batted .281/.333/.404 with 160 home runs in 2,025 plate appearances, though simply citing his offensive numbers doesn’t do Molina justice. He is, after all, a nine time-All Star and a nine-time Gold Glove winner who has always been a highly regarded clubhouse leader and could wind up in the Hall of Fame. The soon-to-be 39-year-old Molina also has a pair of World Series on his resume, further adding to his mystique in St. Louis. 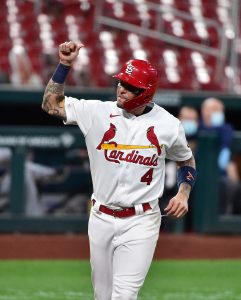 Molina received interest from other clubs earlier this winter, but a return to the Cardinals has looked like an inevitability for weeks. A reunion between the two has seemingly become even more probable since the Cardinals kicked their offseason into high gear in late January. Dating back to then, they have re-signed right-hander Adam Wainwright, who’s close with Molina and also ranks as a franchise icon, and swung a massive deal with the Rockies for superb third baseman Nolan Arenado.

Molina, assuming he returns, will once again line up as the Cardinals’ No. 1 catcher in 2021. While Molina isn’t the star he was in earlier years, he did bat .262/.303/.359 (passable relative to his position) in 156 plate appearances last season and throw out an eye-popping 45 percent of would-be base thieves. It appears he’ll once again mentor younger Cards backstop Andrew Knizner during the upcoming campaign.

Molina’s exit from the open market will take away another option at catcher, which is arguably devoid of starting-caliber free agents there. MLBTR ranked Molina as the 32nd-best overall free agent at the start of the offseason and predicted he would re-sign with the Cards on a one-year, $10MM contract.