FanGraphs’ 2021 playoff odds are out.  If you’re into forecasting, it’s fun to look at something like this.  At this moment in time, FanGraphs projects the Yankees, Twins, Astros, Mets, Cardinals, and Dodgers as the six division winners.  Their projections have the White Sox, Blue Jays, Padres, and Braves as the wild card teams.

For FanGraphs’ playoff odds to have any meaning, you have to consider the many underlying assumptions.  FanGraphs’ Ben Clemens explains how it’s done here.  Most importantly, team projections require forecasts for both performance and playing time.  I’m going to assume that the site’s Depth Charts player projections, described as ” a combination of ZiPS and Steamer projections with playing time allocated by our staff,” are similar to what fuels their playoff odds.

One thing that’s easy to forget when talking about which teams have improved the most over the offseason is that we cannot assume the performance of holdover players will be constant.  Take AL MVP Jose Abreu, for example.  Abreu was worth 2.6 WAR in last year’s 60-game season, so with a simple multiplier of 2.7, that extrapolates to about 7 WAR over a full season.  In other words, for 60 games, Abreu played like a 7-WAR player.

Here’s a look at the position players FanGraphs expects to lose the most WAR in 2021, compared to the player’s extrapolated full season 2020 production (link for app users): 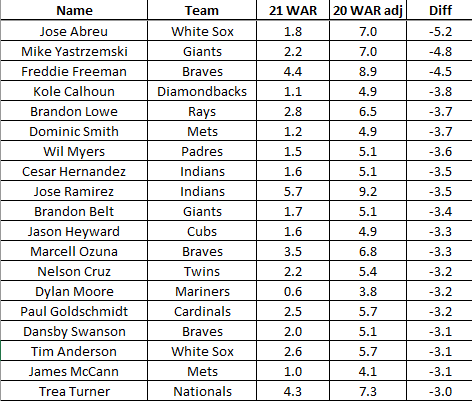 On the flip side, many who struggled in 2020 are expected to bounce back.  I’ve replaced negative 2020 WARs with zero for the table below, as I don’t think it makes sense to extrapolate J.D. Martinez’s -1.0 WAR to -2.7.  With that in mind, here are the biggest projected gainers for position players (link for app users): 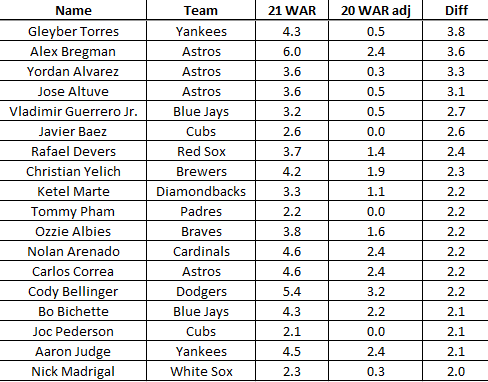 On to the starting pitchers.  Here are the biggest projected dropoffs (link for app users): 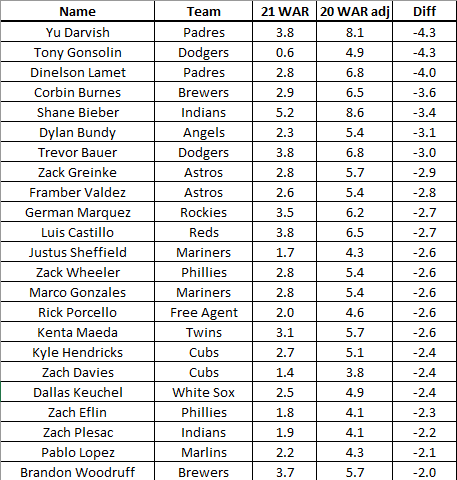 And here are the biggest projected gains for starting pitchers.  As you’d expect, the biggest gains are projected for pitchers who missed all of 2020 due to injury or opting out (link for app users): 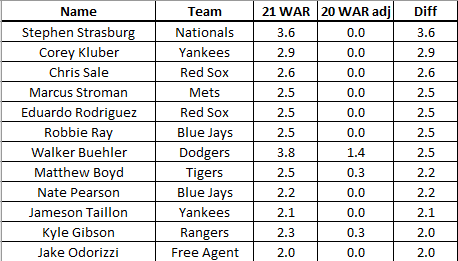 What do you think?  Which players will experience the biggest change from their 2020 performance?