After weeks of speculation, the Mets have hired their new manager.  New York announced on Monday that they’ve hired veteran skipper Buck Showalter. It’s reportedly a three-year contract that’ll go down as the largest investment in a manger in franchise history, topping the $9.4MM earned by Art Howe.

“Buck has been one of the best baseball minds for the last two decades and he makes teams better,” owner Steve Cohen said in the team’s statement. “We have a lot of talent on this team and Buck is the right manager to take us to the next level and lead us to sustained success. I am excited he is our new manager.”

It had already been reported that Showalter had advanced past the initial pool of candidates and moved onto the second round of interviews for the managerial opening. This represents another close call at helming a dugout for the other two finalists, Tampa Bay’s Matt Quatraro and Houston’s Joe Espada. Despite reverence around the league for the latter two coaches, industry insiders quickly tabbed Showalter as the frontrunner for the Mets position. 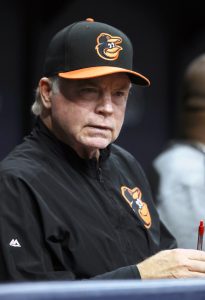 The veteran skipper will now take over a Mets dugout that has been something of a revolving door since Terry Collins’ seven-year run as manager ended after the 2017 season.  Mickey Callaway was fired after two seasons, and following the short-lived hiring of Carlos Beltran, bench coach Luis Rojas took over the manager’s mantle heading into 2020.

The past two seasons saw Rojas sport a 103-119 record, a disappointing sum for a team with so much star power. While Rojas can hardly be pinned as the sole reason for the team’s struggles (the cross-town Yankees promptly hired Rojas as a coach following his dismissal, speaking to his abilities), he did oversee a collapse this past season. After spending 114 days in first place, the Mets were no longer able to weather injuries and under-performance, ultimately limping to a third place finish in their division.

While Rojas, Beltran, and Callaway were first-time MLB managers, Showalter is a known commodity.  Over the course of 20 seasons and 3069 games, Showalter sports a .506% winning percentage and has taken home Manager of the Year hardware with three different clubs (1994 Yankees, 2004 Rangers, 2014 Orioles).

While Showalter has never won a World Series as a manager, many around the league have cited his leadership skills as a reason teams become postseason contenders. Most recently, during his 2010-2018 run with Baltimore, Showalter helped turn a rebuilding club into one of the American League’s winningest teams. After a 69-win inaugural full season with the club, Showalter quickly saw the team post non-losing records in the next 5 seasons. The Orioles made the playoffs three times during that stretch, including once as a first place team— no small feat considering the financial powerhouses that reside in the AL East.

It’s been some time since Showalter managed one of those very powerhouses, last managing the Yankees in 1995. Improbably, he’ll now helm a team with even greater resources at its disposal. In a series of win-now moves, the Mets have launched their 2022 payroll to new heights. RosterResource pegs the Mets to open next season with a franchise-high $263MM payroll, a number that is handily the highest in all of baseball, and was more astonishingly reached with months (and plenty of free agents) left in the offseason.

With the likes of Max Scherzer, Starling Marte, Mark Canha, and Eduardo Escobar already joining the Mets this offseason it’s become imminently clear the NL’s New York club isn’t content to idle under .500.  Pair these additions with star holdovers Jacob deGrom, Brandon Nimmo, Francisco Lindor, and Pete Alonso and the Mets are teeming with top-shelf talent. That collection of players, plus all of the other bounce-back talent on the roster, will give the team’s new manager plenty of firepower to claim a division that has belonged to Atlanta the past four years.

In the ensuing weeks Showalter will round out his coaching staff, while the Mets may still add players to their club after the lockout is lifted. Whatever changes are made before the 2022 season starts however, many pundits and fans will point to this hiring as the team’s key move of the offseason. Hiring a widely-respected stabilizer may be just what the Mets need to capitalize on their potential and get to the postseason for the first time since 2016.

Jon Heyman of the MLB Network reported Showalter’s deal was a three-year contract. Mike Puma of the New York Post reported the deal was the largest for a manager in franchise history.