12:21pm: Bradley and the Angels have agreed to a deal, tweets MLB Network’s Jon Heyman. He’ll earn $3.75MM on a one-year contract, tweets Ken Rosenthal of The Athletic.

9:38am: The Angels are close to finalizing an agreement with free-agent reliever Archie Bradley, tweets Sam Blum of The Athletic. The right-hander is headed to Arizona (where the Halos have their Spring Training facility) at the moment, Blum adds. Bradley is a client of BBI Sports Group. 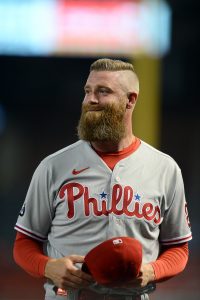 Drafted by the D-backs with the No. 7 overall pick back in 2011, the now-29-year-old Bradley struggled as a starter early in his career with Arizona before seeing his career take off in 2017 when he moved to the bullpen. Bradley logged a minuscule 1.73 ERA through 73 frames that season and has since been entrenched as a quality reliever with the D-backs, Reds and — last season — the Phillies.

The 2021 season was Bradley’s first in Philadelphia. After being acquired by the Reds at the 2020 trade deadline and pitching well in his brief stint there, Bradley was non-tendered in a surprising cost-cutting move by Cincinnati. He inked a one-year, $6MM with the Phillies that exceeded the salary he’d been projected to receive in arbitration with the Reds. Bradley had a solid season in Philly, notching a 3.71 ERA over the life of 51 innings, but the year wasn’t without its red flags.

Bradley missed time with a pair of oblique strains last season, and when he was healthy, he posted his lowest strikeout rate (17.9%), lowest average fastball velocity (94.2 mph) and second-highest walk rate (9.8%) since moving to the bullpen back in 2017. It was still an effective year overall, of course, and the pair of injuries quite likely had an adverse impact on him. With the Phillies, Bradley also threw his sinker at a career-high 18.2% (double the rate of the 2020 season), which resulted in a 55.7% ground-ball rate — his best since moving from the rotation to the bullpen. In that sense, it seems there was a conscious decision to trade some whiffs for some grounders (a curious approach considering Philadelphia’s woeful infield defense last year).

If Bradley resumes throwing his four-seamer more heavily in 2022, there’s good reason to expect that his strikeout rate might creep back up a bit. And if he continues to favor his sinker more than in seasons past, he’ll at least be moving to a club that boasts a better defensive group around the infield. Each of Anthony Rendon, David Fletcher and the newly signed Matt Duffy are known for quality glovework.

Bradley has experience closing games, but the move to Anaheim will reunite him with former Reds teammate Raisel Iglesias, who he’ll surely precede as a setup man. Iglesias and Bradley were both cut loose by Cincinnati following that 2020 season — Iglesias in a salary dump trade, Bradley via the aforementioned non-tender — and will now again work together to hold late-inning leads. The Halos re-signed Iglesias to a four-year, $58MM contract earlier this winter after the Cuban-born righty enjoyed a career year in 2021. That duo, along with righty Mike Mayers and lefty Aaron Loup (signed to a two-year, $17MM deal this winter) will be counted among the primary late-inning options for skipper Joe Maddon.

Bradley’s deal boost the Angels’ actual payroll up to a projected $179.5MM — only narrowly shy of last year’s $182MM record Opening Day payroll. The Halos’ luxury-tax payroll (which is based upon the combined annual value of their contractual obligations) now jumps north of $195MM — well shy of the new $230MM luxury tax threshold.