March 17: Miller has been signed to a two-year contract, the Rangers announced Thursday. It’s a $10MM guarantee for Miller that’ll pay him $6MM in 2022 and $4MM in 2023, tweets Chris Halicke of Sports Illustrated.

March 15: The Rangers have reached an agreement with free agent infielder Brad Miller tweets MLB Drops. The financial terms of this deal have not yet been reported.

The 32-year-old Miller is coming off a decent season with the Phillies, as he batted .227/.321/.453 (107 OPS+) with 20 home runs  in 337 plate appearances in 2021. Additionally, Miller lined up at both outfield corners and every infield position besides shortstop last season. Defensive metrics have been bearish on his performance at most of those positions, though there’s little denying the utility of a bat-first player who can play five positions in a pinch. 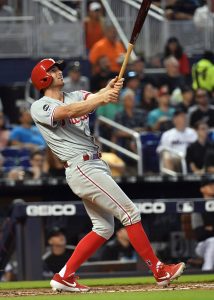 While Miller is coming off his third straight above average offensive campaign, his limitations are reflected in that modest plate appearances total. After seeing fuller playing time earlier in his career, the left-handed Miller has been platooned with greater frequency in recent years. The results bear that decision out, as the former-Phillie has a lifetime .610 OPS against left-handed pitchers but a solid .780 OPS when holding the platoon advantage. Last year’s splits were even more drastic, as those OPS numbers dipped and climbed to .538 and .842, respectively.

The signing makes ample sense for a Texas squad that has playing time up for grabs at third base and in the outfield. After losing top third base prospect Josh Jung for most of the season to shoulder surgery and parting with Isiah Kiner-Falefa in the deal that netted them Mitch Garver, the Rangers very quickly found themselves without a slam dunk starter at third base. That may well continue to be the case after this signing, as Miller has just 49 big league games at the position to his name.

Texas now seems primed to platoon Miller with some combination of its incumbent third base options, Andy Ibanez and Nick Solak, who have each shown demonstrably better against left-handed pitchers in their brief careers. Because of all three players’ ability to bounce around the field, manager Chris Woodward should have no trouble finding at-bats for the trio, barring future additions.

The addition of Brad Miller to a Rangers team coming off a 60-win season is the continuation of a busy winter for the front office braintrust of Jon Daniels and Chris Young. After a season in which the Rangers did very little competing, the young talent from last season’s team will now have to vie against their new veteran teammates for maximum reps. Given the pace of their offseason so far and the amount of players jockeying for a large role on an improved 2022 team, the Rangers’ truncated spring training camp figures to be one of the league’s most hotly contested sites in the coming weeks.