The Blue Jays are signing left-handed pitcher Yusei Kikuchi, per Jon Heyman of MLB Network. It’s a three-year, $36MM contract. (Twitter links) The deal is frontloaded, per Bob Nightengale of USA Today, with Kikuchi earning a salary of $16MM in 2022, followed by $10MM in each of 2023 and 2024.

Starting pitching has been a hot commodity this offseason, with most of the top names signing before the lockout. Now that the transactions freeze has thawed, the market has picked up right where it left off. The top two free agent hurlers that lingered on the market through the lockout, Clayton Kershaw and Carlos Rodon, signed on the first full day after the lockout ended. That left Kikuchi and Zack Greinke as the only healthy starters remaining from MLBTR’s list of Top 50 Free Agents. With the Jays scooping up Kikuchi, that leaves Greinke as the last man standing.

Kikuchi has been one of the more difficult pitchers to evaluate since coming over from Japan prior to the 2019 season. In his first MLB season, he made 32 starts for the Mariners, throwing 161 2/3 innings with an ERA of 5.46 and a strikeout rate of just 16.1%. In the shortened 2020 campaign, he made nine starts and still had a high ERA of 5.11, but made huge strides in the strikeout department, bumping his rate up to 24.2%. 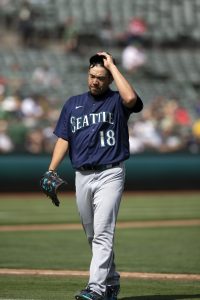 2021 was a tale of two seasons for Kikuchi, as the first half his campaign was excellent. At the start of July, MLBTR’s Steve Adams wrote about Kikuchi’s season around the midway point, when Kikuchi had made 15 starts and was sitting on an ERA of 3.18, strikeout rate of 25.4%, walk rate of 8.5% and ground-ball rate of 53.8%. But things went completely in the opposite direction in the second half of the season, as Kikuchi threw 63 2/3 innings from that point on, with a 6.22 ERA, 23.3% strikeout rate, 10.3% walk rate and 41.7% ground-ball rate.

As part of the unusual structure of Kikuchi’s contract, at the end of the season, the Mariners then had to decide whether or not to execute a series of four one-year options valued at $16.5MM each, effectively a four-year, $66MM extension that would cover the 2022-25 seasons. After they declined, then Kikuchi could have selected a one-year, $13MM player option for the 2022. Though it seemed there was a chance he would accept that deal after his poor performance down the stretch, he ultimately declined and tested the free agent market. That has now proven to be a wise decision on his part, as he has earned himself a new contract at that exact rate but three times as long.

The Blue Jays were evidently encouraged enough by Kikuchi’s strengths to overlook his weaknesses, much like they were with Robbie Ray and Steven Matz. Although those two pitchers had serious flaws on their respective resumes, they both went on to have excellent campaigns with the Jays in 2021, with Ray earning the American League Cy Young award. Although Ray and Matz will both be wearing new uniforms this year, Kikuchi is still going to be joining a strong rotation. The club also added Kevin Gausman prior to the lockout, joining Jose Berrios, Hyun Jin Ryu and Alek Manoah. That is likely to be the club’s front five, but they also have Ross Stripling on hand, who could function either as a starter or long-man out of the bullpen. Nate Pearson could potentially join the rotation at some point, though he has durability concerns after throwing just 18 innings in 2020 and just 45 2/3 in 2021.

After the lockout, the 2022 season is going to feature a condensed Spring Training and a regular season with added double-headers to make up for the delayed start to the campaign. Those factors, combined with the dwindling options in the free agent market, led the Jays to take a risk by bolstering their depth with a pitcher who has had flashes of excellence but also definite concerns.

As for the structure of the deal, it’s worth pointing out that the Blue Jays also front-loaded their contract with George Springer. This seems to be a way of taking advantage of the fact that most of the club’s core players are still working their way through arbitration and will only get increasingly expensive in the coming years. Vladimir Guerrero Jr. is arbitration eligible for the first time this year as a Super Two player. Teoscar Hernandez will be playing his second of three arbitration seasons in 2022. Bo Bichette and Jordan Romano won’t be arbitration eligible until next year. By paying Springer and Kikuchi more now, the club will have a little bit extra wiggle room to weather the increasing salaries of those players in the coming seasons.