The Twins and Rangers are in agreement on a deal that will send infielder Isiah Kiner-Falefa to Minnesota, reports Jeff Passan of ESPN. Kiner-Falefa and a prospect will head to Minnesota in exchange for catcher Mitch Garver, per Jon Heyman of MLB Network. Pitcher Ronny Henriquez is the prospect heading to Minnesota in the deal, per Betsy Helfand of the St. Paul Pioneer-Press.

For the Rangers, this is yet another headline-grabbing move in what has been a very busy offseason for the club. Prior to the lockout, they threw around big money to add various players, with the two biggest names being shortstop Corey Seager and second baseman Marcus Semien. The addition of those two infielders, along with the impending arrival of prospect Josh Jung, led to immediate speculation that Kiner-Falefa could be a trade candidate. But when Jung underwent shoulder surgery last month, that seemed to swing the pendulum towards Texas keeping Kiner-Falefa as their everyday third baseman. However, that has now proven not to be the case, as he is headed for Minnesota.

The Twins had Andrelton Simmons as their primary shortstop last year. Despite showing the defensive skills he has long been known for, Simmons had a dismal year at the plate, hitting .223/.283/.274, wRC+ of 56. Yesterday, he signed with the Cubs for a modest $4MM salary, showing that the Twins weren’t terribly motivated to bring him back into the fold. With Kiner-Falefa, they’ve brought in a player with a similar profile to Simmons, but more reasons to be optimistic about his future performance. Like Simmons, Kiner-Falefa is a glove-first player, winning a Gold Glove in 2020 and finishing third among MLB shortstops in the Fielding Bible’s voting this past season. His bat has been below average thus far in his career, having never put up a wRC+ higher than 94. However, he’s still relatively young, turning 27 later this month, compared to the 32-year-old Simmons. He also hit .271/.312/.357 last year for a wRC+ of 85, not great numbers but certainly better than what Simmons provided. He’s also projected for an arbitration salary of $4.9MM, per MLBTR contributor Matt Swartz, and comes with an extra year of control beyond that. 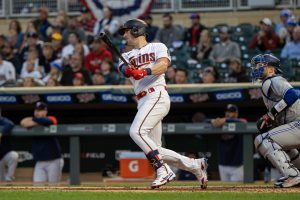 But in order to make that solid addition to their infield, the Twins have had to send a valuable player the other way. Garver had a tremendous breakout season in 2019, hitting .273/.365/.630, wRC+ of 155. That would be exceptional production for any player but was especially impressive for a catcher. Injuries limited him to just 23 games of anemic production in the shortened 2020 season, but he bounced back well last year. Despite still dealing with injuries and only playing 68 games, his 2021 line was .256/.358/.517, wRC+ of 137. Last year, the Rangers split the catching duties almost evenly between Jose Trevino and Jonah Heim, who put up wRC+ tallies of 60 and 64, respectively. Garver is capable of producing at a much higher rate, but comes with concerns given the injuries of the past few years, making him a high-risk, high-reward option for Texas. He won’t be a huge risk from a financial standpoint, however, as he’s projected for an arbitration salary of $3.1MM this year, with another year of control remaining after that.

The reason the Twins could afford to part with such a talented catcher as Garver was the emergence of Ryan Jeffers. Making his MLB debut in 2020, he played 26 games and hit .273/.355/.436, wRC+ of 120. In 2021, he got off to a rough start, hitting .147/.216/.176 before getting demoted at the end of April. After showing signs of improvement in Triple-A, he was recalled in June and hit .206/.277/.433 the rest of the way, good enough for a wRC+ of 92. Although that’s clearly a drop-off from Garver’s numbers, Jeffers is turning 25 years old in June and comes with five remaining years of control. The Twins clearly felt that it was worth taking the chance on the younger player as their regular catcher in order to upgrade their infield.

Of course, that’s not all the Twins added, as they also brought Ronny Henriquez over in the deal. The 21-year-old right-hander split last season between High-A and Double-A, making 16 starts in 21 total games. In 93 2/3 innings, his 4.71 ERA wasn’t especially impressive, but the Twins were surely intrigued by his 27.1% strikeout rate and 6.5% walk rate, both of those being better than average. The club certainly needs arms after losing Jose Berrios to trade, Kenta Maeda to injury and Michael Pineda to free agency. Henriquez likely won’t provide immediate help in that regard, given that he’s never pitched above Double-A, but he could potentially be a factor later in the season.

Circling back to the Rangers, with Kiner-Falefa out of the picture and Jung on the shelf for around six months, they will have to decide what do about third base for this season. In-house options include Andy Ibanez, Nick Solak, Yonny Hernandez and Sherten Apostel. They could also turn their attention towards outside addition, although a tweet from Jeff Wilson casts doubt about a pursuit of Kris Bryant.