The Cubs and starter Drew Smyly are in agreement on a one-year contract with a mutual option for a second year. The first year carries a $4.25MM base with a $1MM buyout on a 2023 mutual option. Smyly, then, is guaranteed $5.25MM over one season with an additional $2.5MM available in potential incentives. The two sides were reportedly close to coming to terms on a deal yesterday.

Smyly should actually get the opportunity to take the hill in Cubbie blue this time: he previously signed a backloaded two-year deal with the Cubs when recovering from Tommy John surgery prior to the 2018 season. He spent that year rehabbing with the organization without ever making an in-game appearance. 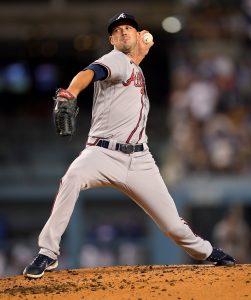 After the season, the Cubs dealt Smyly to the Rangers in a bit of financial acrobatics. At the time, the Cubs were trying to bring back Cole Hamels, who had a buyout option that Texas was on the hook to pay if the Cubs didn’t accept a team option. The Rangers were basically given the choice of paying Hamels’ $6MM buyout, or taking on Smyly and his $7MM, one-year deal.

The Rangers chose to avoid the dead money and add Smyly to their rotation. Even if Texas’ hand was forced to a certain degree, they needed pitching, and Smyly seemed a fair and affordable bet to rebound from Tommy John surgery. Unfortunately, he never found his footing with the Rangers, posting a 8.42 ERA across 51 1/3 innings, earning his release in June.

Since then, he’s become a mercenary swingman, finishing the 2019 season with the Phillies, spending the shortened 2020 year with the Giants, and then winning a World Series ring as part of the Braves last season.  Smyly did not make the postseason rotation, but he did appear in three games during the run, including twice in the World Series.

During the regular season, he made 23 starts and appeared in 29 games for the Braves, logging a not-insubstantial 126 2/3 innings with a 4.48 ERA/5.11 FIP. Smyly continued a career trend in keeping the ball in the air with just a 39.2 percent groundball rate in 2021. He recorded a 21.4 percent strikeout rate and 7.5 percent walk rate, both numbers fairly close to average marks for a starting pitcher.

For the Cubs, Smyly can help fill out a rotation that’s improved from last year’s unit, but still facing a number of questions. Marcus Stroman, Kyle Hendricks, and Wade Miley make up a veteran front three, but there’s not much beyond that veteran trio, especially with the recent news that Adbert Alzolay will begin the year on the injured list. Smyly becomes the leading candidate for the fourth spot in the rotation, and given the guaranteed money on his deal, he’s a safe bet to at least start the season in the rotation.

Looking over his shoulder, Alec Mills, Steven Brault, Justin Steele, Keegan Thompson, Cory Abbott, Anderson Espinoza, and Brailyn Marquez are other potential rotation candidates. Down the line, Caleb Kilian, Ryan Jensen, Riley Thompson, and Alexander Vizcaino are prospects with some pedigree who could play their way into rotation minutes.

The Athletic’s Ken Rosenthal (via Twitter) broke the initial news of the deal, while MLB Network’s Jon Heyman (via Twitter) added the initial financial terms. MLB.com’s Mark Feinsand provided the details of the mutual option.