9:42am: The Cubs will exercise their $20MM club option on left-hander Cole Hamels today and also trade fellow left-hander Drew Smyly to the Rangers, reports ESPN’s Jerry Crasnick (via Twitter). Late last night, The Athletic’s Ken Rosenthal reported that a long-term deal between Hamels and the Cubs was unlikely and that the team could make a move to clear some salary before agreeing to pay Hamels at a $20MM rate for the 2019 season. 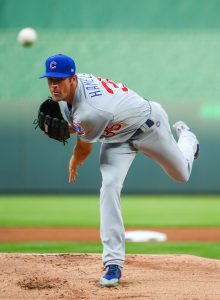 Hamels will step into the rotation spot that had been earmarked for Smyly when he signed a two-year, $10MM deal with Chicago last offseason. Rehabbing from Tommy John surgery at the time, Smyly inked a back-loaded, two-year contract that calls for a $7MM salary in 2019. However, Hamels’ eye-opening resurgence to nearly ace-level status with the Cubs presented Chicago with what it clearly deems a preferable alternative to Smyly.

The Cubs have been weighing all week whether to exercise Hamels’ option or opt for a $6MM buyout. The wrinkle in that scenario is that, under the terms of the trade that sent Hamels to Chicago, the Rangers would be on the hook for the buyout sum. That Texas would pay the $6MM buyout seemed little more than a formality at the time; there was little thought that Hamels would pitch well enough to merit a $20MM salary for the upcoming season.

In essence, then, the reportedly forthcoming trade is a somewhat creative means of the Cubs retaining Hamels while still receiving the benefit of the same level of financial compensation from the Texas organization — if not a bit more. The Rangers will absorb either all of Smyly’s $7MM salary or, speculatively speaking, could agree to pay $6MM of that sum with the Cubs eating $1MM in cost in order to keep the dollars at the same level they’d have been had Texas merely paid the buyout.

In the end, the Rangers will receive a desperately needed rotation piece, while the Cubs will retain the former Phillies ace who immediately won the hearts of Cubs fans with an otherworldly run of success following the trade. Hamels allowed just five runs, total, through his first seven starts with the Cubs and finished out the season with a 2.36 ERA in 76 1/3 innings for the Cubs.

While his 82.3 percent strand rate isn’t sustainable and points to some degree of regression, Hamels nonetheless looked legitimately improved following the trade. He should slot comfortably into the middle of a Cubs rotation that’ll also feature Jon Lester, Kyle Hendricks, Jose Quintana and a hopefully healthier Yu Darvish in 2019. The Cubs also have Mike Montgomery on hand as a valuable safety net for the rotation as well as righty Tyler Chatwood, though his three-year contract has been a bust to this point. It seems likely that the Cubs could look for opportunities to unload the remaining $25.5MM on that ill-fated signing this offseason in order to further clear some salary.

That, perhaps, is the largest remaining question at play here. Cubs president of baseball operations Theo Epstein has been vocal about his desire to improve an offense that, as he put it, “broke” late in the 2018 season and certainly in the team’s National League Wild Card loss to the Rockies. It’s seemed fair to assume that the Cubs would be prepared to spend aggressively as a means of doing so, either by investing in the free-agent market or looking at established bats on the trade market.

However, ESPN’s Buster Olney tweeted this morning that other teams have gotten the sense that the Cubs’ payroll flexibility is far more limited than one might think. If that’s the case, moving Chatwood or some other money could be something of a prerequisite for further additions. Even with Smyly off the books, Hamels’ salary will push the Cubs’ payroll north of the $200MM mark (when factoring in arbitration-eligible players and pre-arb players) — quite possibly close to the $206MM luxury tax barrier; Smyly’s contract came with a $5MM luxury tax hit, whereas Hamels’ deal after the option is exercised effectively becomes a seven-year, $158MM contract and would carry a $22.5MM luxury hit. The maximum capacity of the Chicago payroll remains unknown, but the Cubs have already pushed into record territory by exercising Hamels’ option, and the offseason has yet to truly begin in earnest. 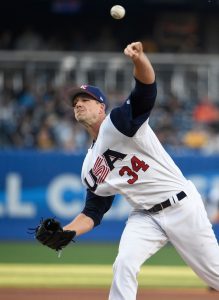 As for the Rangers, while Smyly’s health is an unknown, he’s the type of arm they can dream on as they strive to cobble together a rotation after virtually everything possible went wrong on their starting staff in 2018. Mike Minor and Smyly are the only real locks for the Texas rotation next season, but Smyly brings significant upside to a team whose internal options beyond Minor were otherwise uninspiring.

General manager Jon Daniels will still need to add further established options and depth pieces to the starting staff, as the current best options after Minor and Smyly look to be Ariel Jurado, Yohander Mendez, Adrian Sampson and Austin Bibens-Dirkx. None of that quartet has found success at the big league level yet, and most of the bunch even struggled in the upper minors.

The further upshot for the Rangers is that as they enter a possible transitional or rebuilding phase, Smyly could very well emerge as a coveted trade asset on the summer market. Smyly hasn’t pitched since the 2016 season due to ongoing injury troubles — most notably the aforementioned Tommy John surgery — but he sports a career 3.74 ERA with 8.7 K/9, 2.5 BB/9, 1.22 HR/9 and a 36.3 percent ground-ball rate in 570 1/3 innings. Smyly has shown flashes of brilliance at times and looked like a potential impact starter — perhaps never more so than when starring for Team USA in the most recent World Baseball Classic — though he’s yet to consistently tap into his talent while also struggling to stay on the field.