March 18: The Dodgers have made the signing official, announcing that Freeman signed a six-year contract through the 2027 season. Mark Feinsand of MLB.com reports (on Twitter) that $57MM of the $162MM guarantee is being deferred, to be paid between 2028-40. Feinsand suggests that brings the real present value of the contract closer to $140MM.

March 16: The Dodgers are adding another star, reportedly agreeing to terms with Freddie Freeman on a six-year, $162MM contract. The Excel Sports Management client finds the sixth guaranteed year he’d been seeking, setting himself up to bolster an already loaded lineup. 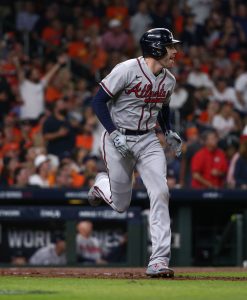 Los Angeles finished tied for third as a team in wRC+ last season (excluding pitchers), with their collective .251/.339/.446 mark checking in 13 percentage points above the league average offense. Only the Astros and Giants fared better, while L.A. was tied with the Blue Jays. They’ve lost Corey Seager to free agency this winter, but Freeman steps right into the void as a left-handed, middle-of-the-order bat for manager Dave Roberts.

One could argue Freeman’s even an offensive upgrade over Seager, who himself is one of the best hitters in the game. Freeman has been a consistently excellent bat, not having posted a wRC+ lower than 132 in any season since 2013. That run has earned him five All-Star nods, three Silver Slugger Awards and six top ten finishes in NL MVP balloting.

Freeman has remained at the top of his game over the past few seasons. He obliterated opposing pitchers to the tune of a .341/.462/.640 line during the 60-game season in 2020. Among qualified hitters, only Juan Soto fared better by measure of wRC+, and Freeman earned a resounding victory in that year’s Senior Circuit MVP balloting. It was never realistic to expect him to repeat that kind of otherworldly performance over a full schedule, but he returned to his metronomically consistent ways in 2021.

Over the course of the season, Freeman appeared in 159 games and tallied 695 plate appearances of .300/.393/.503 hitting. He popped 31 homers, drew walks at a robust 12.2% clip and only struck out in 15.4% of his trips to the plate. Freeman began the year with a relatively pedestrian start by his lofty standards, but he got scorching hot from June onwards. Over the season’s final four months, he raked at a .329/.404/.520 clip. That production helped carry the Braves to their fourth straight division title, and Freeman picked up where he left off when the lights were brightest. He posted an OPS of .996 or better in all three playoff rounds, helping Atlanta to their first World Series title since 1995.

Coming off that championship, many expected Atlanta would strike quickly to ink the career-long Brave to another deal. Freeman and the club had already lined up on an extension once, a February 2014 eight-year pact that guaranteed him $135MM and delayed his first trip to the open market by five years. The Braves maintained they had interest in keeping Freeman in the fold, but the first baseman’s desire for a sixth year quickly became a stumbling block.

Atlanta, which had made Freeman a qualifying offer at the start of the offseason, reportedly put forth a five-year proposal in the $135MM range. It’s believed they eventually nudged the guarantee around $140MM, but the organization seemed opposed to putting a sixth year on the table. Freeman turned 32 years old in September, and Braves brass apparently had real reservations about guaranteeing him a notable salary through his age-37 campaign.

Throughout the lockout, industry chatter picked up that Freeman and the Braves might be heading their separate ways. That became all but official when Atlanta struck a deal to acquire A’s star Matt Olson on Monday afternoon, then signed him to a $168MM extension the next day. Freeman penned a farewell to his former teammates, coaches and the Atlanta fanbase on Instagram this afternoon.

It’s not hard to see the Braves reasoning for letting Freeman walk. Olson is more than four years younger, so his extension only takes him through his age-35 season. There’s real risk in committing to any player into his late 30’s, and that’s particularly true given that Freeman needs to continue to hit at a very high level to be an elite player. He’s a solid defensive first baseman but unlikely to be a perennial Gold Glove winner into his mid-30’s.

Recent six-plus year contracts for free agents at the position haven’t been particularly fruitful. Each of the past four deals of six-plus years for first basemen — the Padres’ eight-year Eric Hosmer agreement, the Orioles’ bringing back Chris Davis on a seven-year pact, Prince Fielder’s nine-year contract with the Tigers, and the Angels’ ten-year investment in Albert Pujols — turned out to be missteps for the club.

Of course, that’s not to say Freeman’s deal with Los Angeles will end the same way. It’s shorter than those precedents, for one, and Freeman has a much more consistent track record than either Hosmer or Davis did at the time they signed their deals. There’s essentially nothing to nitpick in his offensive profile. Freeman doesn’t chase many pitches, and he makes plenty of contact on offerings both inside and outside the strike zone. He posts high-end exit velocities and hard contact rates annually. As is the case with most left-handed hitters, he’s better against right-handed pitching. Yet Freeman’s career .266/.348/.436 mark against southpaws demonstrates he’s more than capable of holding his own without the platoon advantage.

Even after the Braves dropped out, a few teams remained involved in the running for his services. The Red Sox, Blue Jays and Padres were superficially tied to Freeman in recent days, but it seems the surprising Rays may have proven one of the Dodgers strongest challengers in the end. Juan Toribio of MLB.com tweets that Tampa Bay made a “strong push” throughout the process, but L.A.’s willingness to acquiesce on the sixth year proved a deal-breaker.

It’s a return to Southern California for Freeman, an Orange County native. In addition to the financial and geographical appeal, he’ll step into a lineup that’s among the best in recent memory. It’s conceivable the Dodgers will roll out an Opening Day lineup consisting of Freeman, Mookie Betts, Trea Turner, Max Muncy, Justin Turner, Will Smith, Chris Taylor, Cody Bellinger and AJ Pollock. Betts, Freeman and Bellinger are each former league MVP’s. Eight of those nine players have garnered at least one All-Star selection; the one player who hasn’t yet gone to the Midsummer Classic, Smith, is among the top handful of catchers in MLB.

The Dodgers have assembled a similarly star-studded pitching staff, and the construction of this kind of roster required a sizable investment from ownership. Los Angeles blew past all three luxury tax tiers last season, incurring nearly $33MM in fees. They’re in line for another huge expenditure this year.

The exact financial structure of Freeman’s deal isn’t yet known, but contracts’ average annual values are used for luxury tax purposes anyhow. Adding $27MM to that mark pushes the 2022 CBT tab north of $277MM, in the estimation of Jason Martinez of Roster Resource. Because they exceeded the CBT last season, the Dodgers will be subject to escalating fees as a second-time payor. They’ll be taxed at a 30% rate for every dollar spent between $230MM and $250MM, a 42% clip on overages between $250MM and $270MM, a 75% rate on overages between $270MM and $290MM and a 90% tax on all expenditures north of $290MM.

In addition to the financial cost, the Dodgers will take on some non-monetary penalties for signing a player who had rejected a qualifying offer. Because they paid the luxury tax last year, they’ll lose their second-highest and fifth-highest picks in the upcoming draft and be stripped of $1MM in international signing bonus space. The Braves, as a team that neither received revenue sharing nor paid the luxury tax, will receive a compensatory pick after Competitive Balance Round B in the upcoming draft. Those selections typically fall in the 70-75 overall range.

That pick will be little consolation to Braves fans disheartened by Freeman’s departure, although that the organization replaced him with a hometown star of their own in Olson should soften the blow. Even when it became clear he’d be leaving Atlanta, however, there were presumably many Braves fans hoping he’d wind up somewhere other than L.A.

Freeman moves on from the reigning World Series winner to join the team he played an instrumental role in defeating in last year’s NL Championship Series. His departure from the defending champs to sign on with what appears to be MLB’s best team adds plenty of intrigue to what’ll be an entertaining battle for control in the National League.

Jon Morosi of MLB.com first reported the Dodgers and Freeman were making progress on a deal that would guarantee $150+MM. Ken Rosenthal of the Athletic reported the sides were discussing a six-year deal in the $160MM range. Kiley McDaniel and Jeff Passan of ESPN reported Freeman and the Dodgers were in agreement on a six-year, $162MM contract.