The Marlins and outfielder Jorge Soler have agreed to a three-year, $36MM contract, MLB.com’s Mark Feinsand reports (Twitter links).  Soler has opt-out clauses after each of the 2022 and 2023 seasons.  Soler is represented by MVP Sports.

The deal represents the second big free agent splurge of the winter for the Marlins, who also signed Avisail Garcia to a four-year, $53MM pact prior to the lockout.  Miami went into the offseason with a stated need for outfield help and more lineup pop, and the result is two players who have combined for 154 homers since the start of the 2019 season. 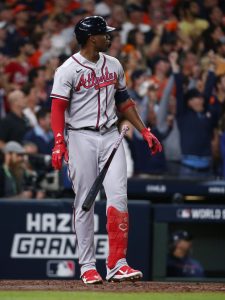 Soler led the AL with 48 home runs during that 2019 campaign, one of the high points of what has been an inconsistent eight-year run in the majors for the 30-year-old.  Both sides of the Soler experience was on display in 2021, when he began the season hitting only .192/.288/.370 with 13 homers over 360 plate appearances with the Royals.

After the Braves picked Soler up at the trade deadline, however, the switch seemed to be flipped.  Soler proceeded to hit .269/.358/.524 with 14 home runs over 242 PA for his new team, and then topped that strong performance in the World Series, batting .300/.391/.800 with three more long balls during 23 PA in the Fall Classic.  With Atlanta capturing the championship, Soler earned World Series MVP honors.

There was plenty of interest in Soler on the open market this winter, as the Braves were interested in a reunion, and clubs like the Rockies, Padres joined the Marlins as known suitors for the slugger.  MLBTR ranked Soler 25th on our list of the winter’s top 50 free agents, and correctly predicted Soler’s actual three-year, $36MM contract.  (Our Anthony Franco took the prognostication a step further and even picked Soler to sign with the Marlins.)

The challenge for any interested club, of course, was determining how much to bid for a player whose production has ebbed and flowed over the years.  By that same logic, Soler and his representatives obviously wanted a solid deal that wouldn’t sell the outfielder short for future years if he did return to that 48-homer pace.  The two opt-outs allow some flexibility in both cases, as if Soler does enjoy a big 2022 season, he can test the market again next winter.

If Soler did end up only being a Marlin for one season, the team might prefer the flexibility, given the continued uncertainty of Miami’s center field situation.  General manager Kim Ng said earlier today that the team was on the lookout for center field help, though Garcia was cited as a possible center field candidate at the time of his signing.

With Soler now added to the mix, it would seem as though Garcia will be tapped for at least semi-regular center field duty, barring another move for the Fish.  Jesus Sanchez can also get some work in center and will play regularly as a corner outfielder, while Soler will play every day in either the other corner slot or as the designated hitter.  Garrett Cooper will likely get the other right field/DH spot that Soler doesn’t occupy, with Cooper and Jesus Aguilar also sharing time at first base.

Bryan De La Cruz will get one outfield bench spot, while minor league signings Delino DeShields and Roman Quinn could be battling for another bench role.  Since DeShields has a stronger defensive track record, that might give him the edge in winning a job, especially if the Marlins seem to be prioritizing hitting over glovework with their other outfield choices.

The likes of Brian Anderson, Joey Wendle, or Jon Berti could also factor into the outfield picture, and future acquisitions can’t be ruled out during what has been a very aggressive offseason for the Marlins.  Between the Soler/Garcia signings and the trades for Wendle and Jacob Stallings, the Fish are making a concerted effort to improve, and the free agent deals represent some notable expenditures for a traditionally lower-payroll team.  Due to some reports that Derek Jeter’s surprising departure as CEO was because of a change in ownership’s willingness to spend, the Soler contract will quiet some criticism directed at the franchise in the aftermath of Jeter’s decision.

If Soler doesn’t opt out and he hits his 2024 incentive clauses, the total value of the deal will top out at $40MM over three years, which isn’t a huge spend in comparison to other free agent contracts.  That said, Miami native Nick Castellanos was another rumored Marlins target, and the Fish might’ve simply felt that spending $36MM (or as little as $12MM) on Soler was a better investment than topping the five-year, $100MM contract Castellanos received from the Phillies.  Castellanos also would’ve cost the Marlins a draft pick via the qualifying offer, whereas Soler wasn’t attached to any draft compensation.