The Nationals have reached an agreement to sign designated hitter Nelson Cruz to a one-year deal worth $15MM, according to Ken Rosenthal of The Athletic.  He notes that the contract includes a mutual option for 2023. 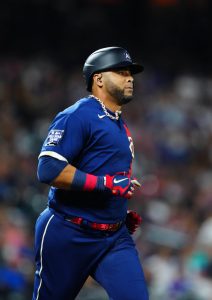 Cruz has been one of the best pure bats in baseball for over a decade, as he has posted a wRC+ of at least 106 each season since 2008, and a wRC+ of at least 122 in each season since 2013. Despite that, his market has increasingly been limited to American League teams due to his defensive limitations. The last time he played more than five games in the field was 2016, and the last time he played the outfield at all was 2018, though he did play one game at first base in 2021. With the new CBA expanding the designated hitter to the National League, that doubled the slugger’s market, perhaps making him the primary beneficiary of the rule change.

In their first full season with a full-time designated hitter, the Nationals have chosen to eschew the common plan of rotating various players through the spot for rest.  They’ll instead turn to Cruz as a 30+ home run bat in the middle of their lineup.  A heart of the order featuring Juan Soto, Josh Bell, and Cruz could be fearsome indeed.

Once the lockout ended, rumors started flying about Cruz’s potential destination, with the Dodgers, Padres, Brewers, and Braves considered finalists earlier today.  Cruz wound up choosing a dark horse suitor in the Nationals, returning to a National League club 17 years after his brief debut with Milwaukee.  Cruz’s $15MM salary is a $2MM increase from the amount he received from the Twins about a year ago.

Last year, after signing Kyle Schwarber to a one-year, $10MM deal and seeing him make the All-Star team, the Nats shipped him to the Red Sox for righty Aldo Ramirez, who is now the team’s 12th-ranked prospect according to Baseball America.  If the Nationals aren’t in contention as the 2022 trade deadline approaches, Cruz could allow for a similar gambit.

Nationals GM Mike Rizzo oversaw something of a reboot last summer, as the club shipped off Schwarber, Max Scherzer, Trea Turner, Brad Hand, Jon Lester, and Daniel Hudson at the trade deadline.  Even with Cruz in tow, the club’s competitive balance tax payroll sits around $150MM, which would mark the team’s lowest since 2013.  Though the Nationals’ primary offseason need was thought to be pitching, thus far Rizzo has only made minor additions in Steve Cishek, Anibal Sanchez, Erasmo Ramirez, and Aaron Sanchez.