5:44pm: To make room for Greinke on the 40-man roster, the club has placed Tyler Zuber on the 60-day IL, per various reports, including Anne Rogers of MLB.com. Zuber has right shoulder impingement syndrome and will miss the start of the season.

4:42pm: The Royals have formally announced the signing.

2:48pm: Zack Greinke is going back to his roots. The free-agent righty has agreed to a one-year deal with the Royals, pending the completion of a physical, Ken Rosenthal of The Athletic reports (via Twitter). Greinke, a client of Excel Sports Management, will be guaranteed $13MM and can earn another $2MM via innings-based incentives, tweets Joel Sherman of the New York Post.

The 38-year-old Greinke isn’t the fireballing ace that he was toward the end of his first run with the Royals, but he remains an effective innings eater. He’ll return to his old stomping ground as the elder statesman on what figures to be an extremely young staff who’ll no doubt want to soak up as much pitching knowledge as possible from the 18-yeasr big league veteran. 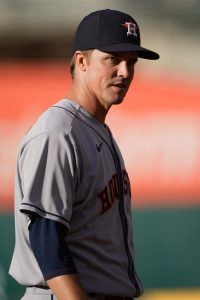 Greinke spent the past two-plus seasons with the Astros after being traded from Arizona to Houston in a buzzer-beating deal at the 2019 trade deadline. Greinke’s once blazing fastball averaged just 89 mph in 2021 and his strikeout rate dipped, but he’s maintained pristine command of the strike zone (5.2% walk rate). Since 2020, Greinke has a 4.12 ERA in 238 innings for Houston, although his 2021 season would’ve looked considerably better were it not for a late September swoon.

Through his first 26 starts in 2021, Greinke pitched to a strong 3.41 ERA. Fielding-independent metrics were still a bit down on him because of the lack of punchouts (17.5% in that stretch), but Greinke yielded a paltry 87.7 mph average exit velocity in that time and had a 33% opponents’ hard-hit rate. Greinke tested positive for Covid-19 at the end of August and went back on the IL in late September due to neck soreness. It’s not clear that either had a direct impact on his results, although it’s certainly possible that he wasn’t pitching at 100% down the stretch. The results seem to suggest as much, as Greinke was tattooed for 21 runs in his final 15 1/3 innings of work.

Even if Greinke should be projected for more of a low-4.00s ERA than the mid-3.00 range he sat for much of the 2021 season, he’ll still be a valuable and reliable source of innings for the Royals. He’s made at least 28 appearances in 11 of the past 14 seasons, with the exceptions being the shortened 2020 season (when he made all 12 of his starts) and the 2016 season (when he missed a month with an oblique injury but still started 26 games).

For a Royals club that expects to give the bulk of its innings to young and/or unproven starters — Brady Singer, Daniel Lynch, Jackson Kowar, Kris Bubic, Carlos Hernandez, Jonathan Heasley — the ability to confidently pencil Greinke in for around 30 starts and 170-plus frames is especially important. Brad Keller is currently the only starter on the staff with more than two years of Major League service time, but he’s in search of a rebound from a career-worst performance this past season.

The deal for Greinke ostensibly came together in fairly quick fashion. Kansas City traded Mike Minor to the Royals just this afternoon, and reports immediately following the deal suggested that they were in the hunt for rotation upgrades. Although they’re said to have checked in with the A’s about a potential Frankie Montas deal, it’ll be Greinke who joins the staff to help stabilize the group and, ideally, help guide the Royals back to a winning record

Subtracting Minor and adding Greinke’s larger salary brings the Royals up to a projected payroll of a bit more than $93MM, per Jason Martinez of Roster Resource. That’s nowhere near the franchise record $143MM from 2017, but that payroll was buoyed by a pair of consecutive World Series appearances achieved by the Royals’ former core. The fact that they felt compelled to move Minor and save some money on his salary before adding Greinke suggests that new owner John Sherman, who purchased the team in 2019, isn’t comfortable pushing payroll back to those 2017 levels at this time.

It’s possible that further additions will follow for the Royals. They’ve reportedly sought ways to trade Carlos Santana, both as a means of clearing playing time for top prospect Nick Pratto and also in order to shed the veteran’s $10.5MM salary. If president of baseball operations Dayton Moore manages to find a Santana deal similar to this afternoon’s Minor trade, additional veteran reinforcements could be on the way to help supplement a young Royals team that’ll see the debuts of Pratto and top prospect Bobby Witt Jr. early in the 2022 season.