The White Sox have agreed to a deal with utilityman Josh Harrison, his representatives at MSM Sports Management announced. The Athletic’s Ken Rosenthal reports (Twitter links) that it’s a one-year, $5.5MM guarantee. He’ll make $4MM in 2022 and the deal also contains a 2023 club option with a $1.5MM buyout. 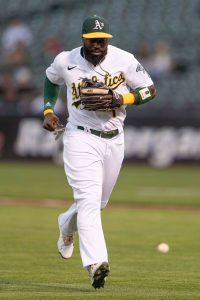 An 11-year MLB veteran, Harrison has remained a productive player into his mid-30s. He’s never been an elite offensive player, aside from a .315/.347/.490 showing with the 2014 Pirates that earned him some down-ballot MVP support. Yet he’s typically been a solid hitter throughout his MLB run, including over the past couple seasons. Harrison rebounded from a down two-year stretch between 2018-19 to post decent numbers since the start of the 2020 campaign.

Over the past two seasons, Harrison owns a .279/.343/.402 line across 649 plate appearances. That’s four percentage points better than league average, by measure of wRC+. Harrison doesn’t have huge power — he’s hit 11 home runs with a .123 ISO (slugging minus batting average) — but he brings excellent bat-to-ball skills to the table. He’s only punched out in 13.4% of his plate appearances over the past couple seasons, and he made contact on 82.7% of his swings last year. That’s more than six points higher than the league mark, a continuation of career-long success putting the bat on the ball.

Midway through last season, it seemed as if Harrison might even be playing his way into a multi-year contract. He saw regular action bouncing between second base, third base and left field with the Nationals and was hitting at a well above-average level (.294/.366/.434) in 359 plate appearances through late July. The A’s acquired him alongside Yan Gomes as part of Washington’s deadline teardown, but Harrison stumbled down the stretch. He hit just .254/.296/.341 in his two months in the Bay Area before reaching the open market.

That late-season downturn coupled with Harrison’s age (35 in July) combined to limit him to a one-year guarantee. He should have a decent path to playing time on a postseason contender with the South Siders, though. Chicago is presently slated to open the year with Leury García at second base after re-signing him to a surprising three-year deal in November. Given Harrison’s and García’s respective price points, the latter might remain the nominal “starter” at the keystone, but both players figure to bounce around the diamond.