The Brewers fortified their catching situation this afternoon, announcing the acquisition of Víctor Caratini and cash considerations from the Padres. San Diego picks up fellow catcher Brett Sullivan and outfield prospect Korry Howell in return. It’s a quick strike for Milwaukee to find a #2 backstop in the wake of an 80-game suspension to presumptive #2 Pedro Severino, who tested positive for the banned substance Clomiphene this week.

Caratini spent one season in San Diego after coming over from the Cubs alongside Yu Darvish last offseason. He functioned as Darvish’s personal catcher, lining up behind the dish in 29 of the righty’s 30 starts. The switch-hitting backstop also saw more action than anticipated in non-Darvish outings, as expected starter Austin Nola was limited to 56 games by injuries. 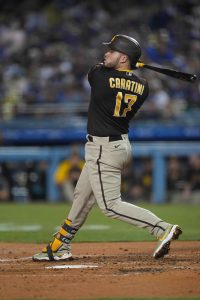 Ultimately, Caratini tallied a personal-high 356 plate appearances during his lone season in San Diego. He hit .227/.309/.323 with seven home runs, a fair bit worse than the .250/.327/.372 line he’d put up in the prior four seasons as a reserve option in Chicago. Last season’s 9.8% walk percentage and 23% strikeout rate were both in line with his respective career marks, but he managed just seven homers and nine doubles en route to a subpar .096 ISO (slugging minus batting average).

Caratini’s average exit velocity and hard contact rate were surprisingly strong, but he negated much of his extra-base potential by hitting the ball on the ground more than half the time. Even if he can’t add more offensive impact, he should offer some decent at-bats off the bench for skipper Craig Counsell. Caratini has been better from the right side of the dish over the course of his career, a trait that pairs well with lefty-hitting #1 catcher Omar Narváez.

The Caratini acquisition is clearly tied to Severino’s suspension, which had left Milwaukee without an obvious backup catcher. The Brewers are set to welcome Severino back in the second half of the year, but Caratini could have a path to securing the job with a strong start to the season. He’s making $2MM after avoiding arbitration this offseason, and he’ll be controllable once more through that process before hitting free agency after 2023.

From the Padres perspective, the trade would appear to be a vote of confidence in out-of-options backstop Jorge Alfaro. San Diego acquired Alfaro, with whom president of baseball operations A.J. Preller is quite familiar from their time in the Rangers organization, in a small trade with the Marlins before last November’s tender deadline. It was a mere cash transaction, but that the Friars affirmatively struck to add Alfaro rather than let Miami non-tender him into free agency (which it had become apparent the Fish were set to do) suggested the Friars had hopes of Alfaro breaking camp.

It would appear he’s in line to do just that after a fantastic showing in Spring Training. Alfaro had ten hits, including four homers, in 24 at-bats in Cactus League play. That’s far less meaningful than his more modest .258/.309/.399 career regular season showing, but Alfaro is a former top prospect whom many evaluators had projected as a possible regular thanks to his power at the plate and strong throwing arm. He’ll presumably make the club as Nola’s backup, with top prospect Luis Campusano also on the verge of the big leagues.

Sullivan, too, could find himself in that mix. The 28-year-old has never played in the majors, but he landed a major league deal with the Brewers this winter after qualifying for minor league free agency. FanGraphs’ Eric Longenhagen writes that he’s a contact-oriented hitter who could be a depth option in the short-term, albeit without much power or a great arm.

The lefty-hitting Sullivan is only coming off a .223/.302/.375 line in Triple-A. The Brewers obviously preferred to go externally rather than turn the backup catching job over to him to start the season. Yet the fact that both Milwaukee and San Diego were willing to commit him a 40-man roster spot suggests he’s of appeal to multiple clubs.

Howell, meanwhile, is a former 12th-round selection out of an Iowa junior college. Baseball America slotted the right-handed hitting outfielder 29th in the Milwaukee farm system this offseason, praising his athleticism and plate discipline but noting concerns about his bat-to-ball skills. That’s borne out in his minor league numbers, as Howell punched out in 28.9% of his trips to the plate in High-A last season. That mark jumped to 39.6% upon a late-season promotion to Double-A. Even with the strikeouts, Howell was particularly productive at the former stop, though. He hit 12 homers and stole 20 bases in 69 games while walking at a strong 11.1% clip, showcasing the combination of athleticism and patience BA noted.

Kevin Acee of the San Diego Union-Tribune first reported the Padres were trading Caratini to the Brewers for a pair of minor leaguers. Joel Sherman of the New York Post reported the return of Sullivan and Howell.