DEC. 29, 10:07pm: Both teams have announced the trade. The Cubs will pay $3MM of Darvish’s remaining money, per Jordan Bastian of MLB.com and Heyman. Darvish has $62MM left on his contract – not the previously reported $59MM – because of the incentives he reached for finishing second in 2020 NL Cy Young voting, Bastian notes.

DEC. 28: The Cubs and Padres have agreed to a deal that will send right-hander Yu Darvish and catcher Victor Caratini from Chicago to San Diego, Mark Feinsand of MLB.com reports. The Cubs will receive righty Zach Davies, shortstops Reginald Preciado and Yeison Santana, and outfielders Owen Caissie and Ismael Mena in return. The trade is done pending medical records, and the sides could finalize it Tuesday, per Jon Heyman of MLB Network.  Chicago will pick up “a minor portion” of Darvish’s remaining money, Bob Nightengale of USA Today adds. 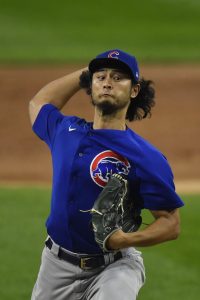 This deal does not come as a surprise, as the two sides had been in deep discussions about Darvish throughout the day. It’s the latest bold strike for the Padres, who are coming off their first playoff season since 2006 and clearly plan to vie for their first-ever World Series title next year. Even before landing Darvish, they made a huge addition to their rotation Sunday by agreeing to pick up left-hander Blake Snell from the Rays. They also agreed to sign Korean infielder Ha-Seong Kim on Monday, making for an epic 24-hour period of dealmaking for GM A.J. Preller.

The Cubs, meanwhile, are losing perhaps their best starter in Darvish – a 2020 National League Cy Young finalist – as well as a quality catcher in Caratini. Although the Cubs are just a couple months removed from their fifth playoff berth in six years, ownership entered the offseason unlikely to spend after a pandemic-shortened campaign. Indeed, the Cubs previously saved money by saying goodbye to Kyle Schwarber and Albert Almora at the non-tender deadline, while pricey third baseman/outfielder Kris Bryant has been the subject of trade speculation. It’s unclear whether the Padres will take on all of Darvish’s remaining contract, but if they do, that’ll be $59MM on their books over the next three years. Caratini’s much more affordable, as he will earn a projected $1.2MM to $1.6MM in 2021. Caratini isn’t on track for free agency until after 2023.

In heading to San Diego, Darvish will reunite with Preller, who was part of the Rangers’ front office when they signed Darvish out of Japan before the 2012 season. Darvish, now 34, has since enjoyed a terrific career divided among the Rangers, Dodgers and Cubs, and last season was likely his best yet. He ended up with 76 innings of 2.01 ERA/2.23 FIP ball, posted 11.01 K/9 against 1.66 BB/9, and averaged a personal-high 95.5 mph on his fastball. He’ll now slot in near the top of a rotation that lost Mike Clevinger to Tommy John surgery but will still feature Snell, Dinelson Lamet and Chris Paddack as locks for rotation jobs (barring other aggressive moves). The Padres also boast multiple high-end pitching prospects, including MacKenzie Gore.

Caratini, 27, was Darvish’s personal catcher in Chicago, but he was a reserve behind No. 1 backstop Willson Contreras. Caratini debuted with the Cubs in 2017 and has since offered passable offense relative to his position, having batted .250/.327/.372 in 677 plate appearances. Caratini was also a well-regarded defender in Chicago, including when he ranked in Statcast’s 98th percentile in the pitch-framing department last season. He’ll join Austin Nola and Luis Campusano as catchers on the Padres’ 40-man roster.

For the Cubs, this deal represents their first blockbuster trade under new president of baseball operations Jed Hoyer, their former GM who earned a promotion after Theo Epstein stepped down in November. Losing Darvish and Caratini may not go over well for their fan base, but the Cubs are banking on Davies helping replace Darvish in 2021 and the young talent they received emerging as cornerstones.

The rest of the Cubs’ return doesn’t consist of any elite farmhands, but Kyle Glaser of Baseball America notes that BA was planning to rank Preciado (No. 15), Mena (17), Santana (18) and Caissie (20) among the Padres’ 20 best prospects in its upcoming Prospect Handbook.

Mena, 18, signed an expensive $2.2MM bonus with the Padres out of the Dominican Republic during the 2019-20 international signing period. BA lauded Mena’s speed, range and potential 15- to 20-home run power earlier this year.

The 20-year-old Santana put up impressive production in rookie ball from 2018-19, when he combined for a .306/.418/.425 line in 365 plate appearances. The Canadian-born Caissie, 18, was a second-round pick (No. 45) of the Padres last summer. BA wrote before the draft that Caissie possesses “exciting upside,” though there are “some significant swing-and-miss concerns” in his game.

All things considered, this looks like a trade between two NL playoff teams going in different directions. The Padres appear to be all in on playing for a championship in 2021. It’s hard to say the same for the Cubs, who seem to be a club in retooling mode.