Julio Rodriguez didn’t give the Mariners much of a choice. The team announced Monday that the 21-year-old outfielder, who is near-universally ranked among MLB’s top three prospects, has made its Opening Day roster. 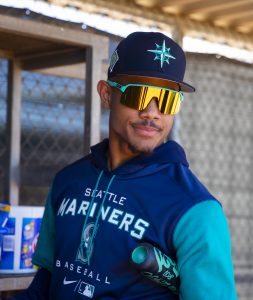 Rodriguez obliterated Cactus League pitching, appearing in a dozen games and slashing .419/.471/.839 with three home runs and four doubles through 34 trips to the plate. He tacked on three stolen bases in four attempts, also flashing his wheels when he circled the bases on an inside-the-park home run, and drew three walks against nine strikeouts.

The massive spring showing comes on the heels of a similarly explosive minor league campaign in 2021. Playing the entire season at age 20 — he turned 21 in December — Rodriguez split the year between Class-A Advanced and Double-A, slashing a combined .347/.441/.560 with 13 home runs, 19 doubles, two triples and 21 stolen bases in just 340 plate appearances. (Rodriguez missed time during the regular season to suit up for the Dominican Republic in the Olympics.)

With just 46 Double-A games under his belt, the Mariners might’ve had a defensible case to keep Rodriguez down in the minors to begin the season had he shown any sign of struggles in camp. But with such a blistering performance in the Cactus League and perhaps in part thanks to the new Prospect Promotion Incentives in the 2021-26 collective bargaining agreement, he’ll instead leapfrog the Triple-A level entirely and get the chance to prove he’s ready to face the sport’s very best pitchers.

Rodriguez figures to join an outfield rotation that also includes offseason acquisition Jesse Winker, veteran right fielder Mitch Haniger and another touted, hopeful building block in Jarred Kelenic. Rodriguez figures to see the bulk of playing time in center field during the early portion of his career, though both Kelenic and Haniger have experience there as well. It’s a talented outfield group has sky-high offensive potential, though both Rodriguez and Kelenic will need to prove that they’re able to handle big league pitching at such young ages. Thus far at least, Rodriguez has been up to the task at virtually every step of his professional career.

Scouting reports on Rodriguez gush over his potential not just to emerge as the face of the Mariners but one of the best players in all of MLB. Baseball America touts Rodriguez’s 80-grade raw power (on the 20-80 scale) and places 70 grades on both his hit tool and his in-game power, noting that while his most impressive long balls are to the pull-side, he can hit the ball out of the park to all fields “with shocking ease.” The Athletic’s Keith Law calls him a potential “long-term cleanup hitter who’ll challenge for MVP awards with 30-40 homers, high OBPs and, at least, solid defense in right field.” Superlatives of this nature are easy to find, as scouts and talent evaluators all agree that Rodriguez looks every bit like a star in the making.

Whether that translates immediately remains to be seen, of course, and for all the lofty expectations placed on Rodriguez, it’s worth recalling that not every ballyhooed prospect hits the ground running. Mike Trout hit .220/.281/.390 in 40 games as a rookie. Ronald Acuna Jr. had a .742 OPS through his first 42 games. Vladimir Guerrero Jr. was five percent better than league-average with the bat as a rookie in 2019. The mere fact that Rodriguez is ranked so highly that he can even be mentioned alongside talents of that nature is impressive in and of itself, but not every top prospect breaks down the big league door and thrusts himself into MVP conversation from the jump, a la Juan Soto.

If Rodriguez is indeed in the Majors to stay, he’ll remain under club control all the way through the 2027 season. He’d reach arbitration after the 2024 season, although it’s quite possible that via the newly implemented bonus pool for pre-arbitration players, he’ll boost his earnings beyond the standard minimum (or close to it) levels for pre-arb players. That’ll depend on Rodriguez’s overall performance and his finish in Awards voting over the next few seasons. If he fares well, it’s also possible that the Mariners will be awarded some bonus selections in future drafts, under the previously mentioned “prospect promotion incentives” put in place under the new CBA.

All that aside, Rodriguez’s immediate promotion to the big leagues is cause for Mariners fans to celebrate. Expectations surrounding the club have rapidly escalated in recent years, due in no small part to last year’s 90-win season and a vaunted farm system headlined by their new Opening Day center fielder. The hope of both the team and fans alike will be that Rodriguez can play a pivotal role in snapping what has become the longest playoff drought not only in MLB but in the NBA, NFL and NHL. The last time the Mariners made the playoffs, Rodriguez had not yet celebrated his first birthday. If the Mariners indeed break through into October baseball this year, there’s a good chance that Rodriguez will have played a considerable role — but for now, fans can simply look forward to getting their first look at a potential franchise cornerstone just over 72 hours from now.